The accident took place at Waghodia circle near the city around 2.45 am when the victims were heading towards Pavagadh 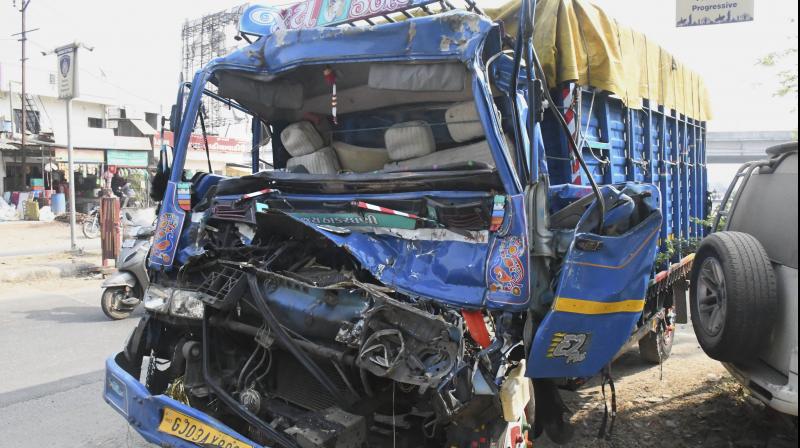 Mangled remains of a mini-truck after it rammed into another truck, on the outskirts of Vadodara, Wednesday, Nov. 18, 2020. At least 10 people were killed and 16 others injured in the mishap. (PTI Photo)

Vadodara: At least 11 people died and 16 others were injured when a mini-truck in which they were travelling rammed into another truck on the outskirts of Gujarat's Vadodara city early Wednesday morning, police said.

The accident took place at Waghodia circle near the city around 2.45 am when the victims were heading towards Pavagadh in Panchmahal district, Vadodara Deputy Commissioner of Police Karanraj Vaghela said.

Eleven people, including five women, succumbed to their injuries, while 16 others are undergoing treatment at the government-run SSG Hospital in the city, the medical facility said in a statement.

"The deceased included 10 passengers and a co-driver of the vehicle," Vaghela said.

"The mini-truck driver, who is under treatment, lost control over the wheels as he dozed off when the vehicle was passing from Waghodia circle on the Surat-Vadodara highway," he said.

As a result, the vehicle rammed into another truck from behind, Vaghela said, adding that no FIR has been lodged yet.

Gujarat Chief Minister Vijay Rupani expressed grief over the loss of lives in the accident.

"Saddened by the loss of lives due to a road accident near Vadodara. Instructed officials to do needful. May those who have been injured recover at the earliest. I pray for the departed souls. Om Shanti," Rupani tweeted.

The victims, all from Varachha area of Surat city, were heading towards Pavagadh, a famous religious place in Panchmahal located near Vadodara, Vaghela said.

It has come to light that some families from Varachha hired the mini-truck to visit temples at Pavagadh, Vadtal and Dakor (in Kheda district) and started their journey from Surat around 11 pm on Tuesday, the official said.

Prime Minister Narendra Modi also expressed grief over the mishap and said the administration is providing all possible assistance to the needy.

"Saddened by the accident in Vadodara. My thoughts are with those who lost their loved ones. Praying that the injured recover soon. The administration is providing all possible assistance at the site of the accident," Modi said in a tweet.