Two die in a blast at Khadki Factory

Sources said a high-level committee will be formed to investigate the matter. 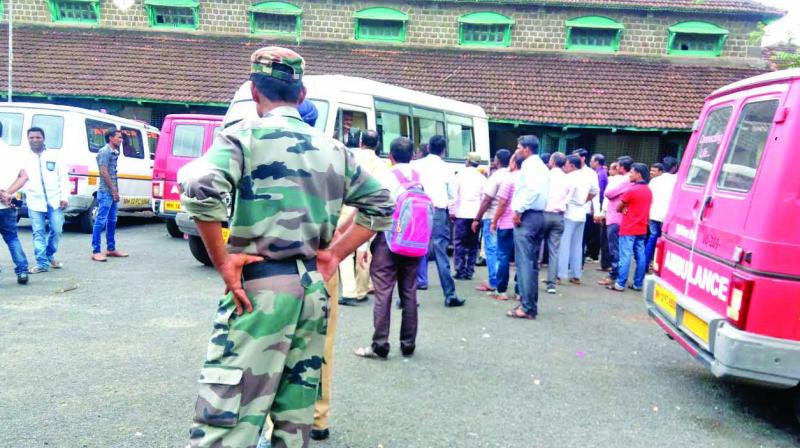 The blast was so powerful that the victims were engulfed in flames instantly and their bodies were too charred to be identified. They were taken to military hospital but were declared dead on arrival.

Pune: Two labourers were killed instantly in an explosion at the ordnance factory in Khadki, Pune at 9.20 am on Thursday.

The deceased have been identified as Ashok Dubbal (48) from native of the state and Yash Mariya Oak (50), a Karnataka resident. According to sources, the blast took place at F2 section of the factory where detonators are made. The labourers were carrying propellant powder, which was mixed in spirit, from one section of the factory to the
other, as was their wont when the blast took place.

The blast was so powerful that both the victims went up in flames instantly, and their bodies were too charred to be identified. Dubbal and Oak were taken to the military
hospital, but they were declared brought dead on arrival. Immediately, all buildings and the surrounding area were cordoned off.

An officer on the condition of anonymity said, “A high-level committee will be constituted to investigate the matter.”

The spokesperson of defence ministry issued a statement saying that situation is under control. The statement reads, “The incident happened today morning at the time of shifting of explosives. It was regular work being carried out by labourers at the factory. Two labourers suffered burn injuries and died. Military explosive experts are on the site to investigate the matter. There has been no damage to buildings or other infrastructure. The situation is under control.”

This is not the first blast at the factory. Earlier, in 2015, a labourer was injured in one such blast.