Metros   In Other Cities  15 Jul 2017  Mahagatbandhan our baby, Nitish had not asked Tejaswi to resign: JD (U)
Metros, Mumbai

Mahagatbandhan our baby, Nitish had not asked Tejaswi to resign: JD (U)

Bihar's deputy chief minister was recently charged of corruption by the Central Bureau of Investigation and the Enforcement Directorate. 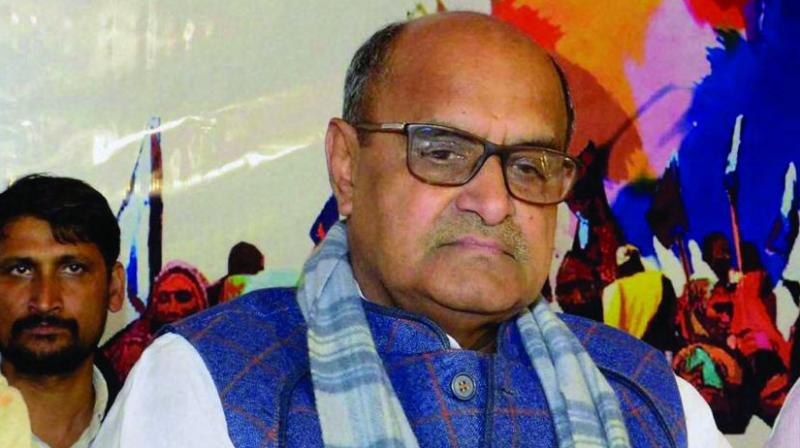 Amid reports of an apparent rift between the parties, Tyagi called the alliance their baby and said nothing will be done to harm it. (Photo: File)

The JD-U, however, demanded that Tejaswi should come out 'clean'.

Tejaswi was recently charged of corruption by the Central Bureau of India and the Enforcement directorate.

"Nitish Kumar is a person of high moral values. Whatever he has had to say has been said during the Vidhan Mandal meeting earlier. Nitishji did not demand resignation. However, to continue to uphold the principles of the party, it is necessary that the concerned minister comes out clean," JD (U) leader KC Tyagi told ANI here.

In response to Lalu's earlier remark of an FIR being insufficient to resign, Tyagi said an FIR is lodged only on the basis of thorough preliminary investigation.

He further urged the necessity to bring the truth to the forefront.

Amid reports of an apparent rift between the parties, Tyagi called the alliance their baby and said nothing will be done to harm it.

"The JD (U) and Nitish Kumar are the last people who will do anything to tamper with the mahagathbandhan. It is our baby, which was initiated by Nitish Kumar. There is no question at all of ending it," he said.

Speaking exclusively to ANI, Lalu had earlier stated that the grand alliance in Bihar is an unbreakable bond, adding that the RJD will not let the Bharatiya Janata Party (BJP) or the Rashtriya Swayamsevak Sangh (RSS) break the alliance between the JD (U), Congress and the RJD.

However there have speculations of a split in the coalition after after the JD (U) urged Tejashwi Yadav to come out clean on the corruption charges imposed by the CBI and the ED and asked Lalu to declare his assets and reveal the source of income.

However, Lalu on Friday said that his son Tejaswi Yadav, who is facing corruption charges, will not resign as Bihar Deputy Chief Minister.

"The Vidhan Mandal of our party has taken a decision that Tejaswi Yadav will not resign," Lalu told ANI in an exclusive conversation.

"An FIR is not sufficient reason for the resignation," he added.

This assertion from the RJD chief thus brought an end to speculations that Tejaswi Yadav might step down from the post to save the ruling alliance.