Accuses previous government of doing nothing to reduce the plight of farmers. 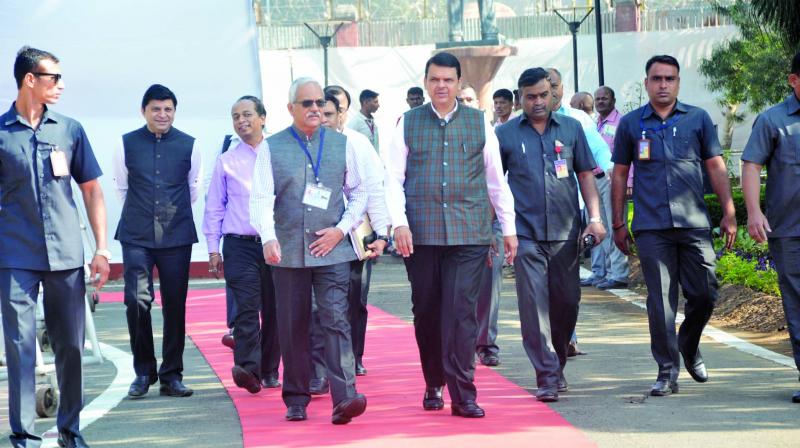 Chief minister Devendra Fadnavis walking into the venue for the assembly session.

Nagpur: Chief minister Devendra Fadnavis on Monday ridiculed the Opposition over its protest against the implementation of the loan waiver scheme for farmers in the state Legislative Assembly on the first day of the Winter Session. “Don’t shed crocodile tears,” Mr Fadnavis told an unruly and agitated Opposition.

Blaming the Opposition for farmer suicides that have been taking place over the years, he said the United Progressive Alliance’s loan waiver was inadequate and that entire amount was now being spent on the Buldhana district alone. “There is no point in pointing fingers at the BJP-Shiv Sena government. You did nothing concrete to rescue the dying farmers,” Mr Fadnavis said, prompting the treasury benches to greet his statement with a thumping of desks.

House, Congress leader Radhakrishna Vikhe-Patil, who accused the government of not fulfilling its promises.

Mr Vikhe Patil waived a `100 stamp paper and said he was willing to send it to the CM for an affidavit on number of beneficiaries of the scheme. Mr Fadnavis promptly returned the fire, saying he was to give an affidavit on a `1,000 stamp paper. Earlier when the House assembled for the day, uproarious scenes marred the proceedings. Opposition lawmakers tried to disrupt House business by initiating adjournment motions to debate on the plights of crisis-ridden farmers in the state, particularly the pink bollworm-affected cotton growers in Vidarbha and the loan waiver issue.

As soon as the house was convened, Mr Vikhe-Patil moved an adjournment motion on farmers’ issue and insisted that the speaker, Haribhau Bagde, allow it. The speaker rejected the motion, but allowed Mr Vikhe-Patil to speak on the issue. In protest, opposition members created a ruckus and shouted slogans against the government and Prime Minister Narendra Modi.