TN CM O Pannerselvam appointed senior IAS officers as monitoring officers for the four districts that could be affected by the cyclone. 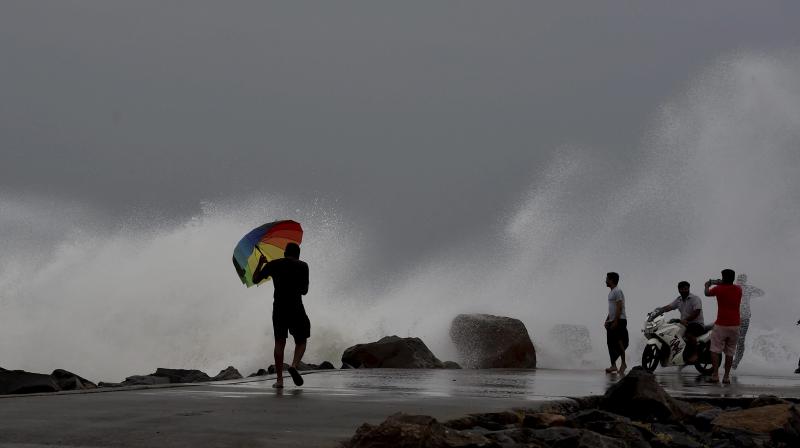 Chennai: Heavy to heavy rainfall accompanied by gusty winds will lash the metropolis and neighbouring districts on Monday as the very severe cyclonic storm Vardah is expected to make landfall off Chennai coast. Chennai is expected to witness squally winds of more than 100 kmph after 22 years — the last such event being in October 1994 when the wind speed varied between 116 kmphand 132 kmph.

Cyclone Vardah has raised hopes of citizens of parched-Chennai and Tamil Nadu, which have so far recorded a deficit of around 60 per cent this northeast monsoon. Unlike Cyclone Jal (2010) and Nilam (2012), which ended up as damp squibs, weather experts predict a dynamic cyclone, which could note a record in peak wind speed tomorrow.

Acting swiftly, the Tamil Nadu Government announced public holiday in Chennai, Tiruvallur and Kancheepuram and a few taluks in Villupuram on account of Vardah. Chief Minister O Pannerselvam appointed senior IAS officers as monitoring officers for the four districts that could be affected by the cyclone. The State Government also made arrangements to evacuate people living in low-lying areas to safety.

The MeT Department has issued heavy rainfall alert to Chennai, Kancheepuram and Tiruvallur districts, he said, adding that Vellore and Villupuram could receive moderate rains. The RMC has also advised fishermen not to venture into the sea along and off Andhra, Tamil Nadu and Puducherry coasts.

Analysing the data, Weather blogger, Sai Praneeth said, “Despite having a landfall at Chennai, Nilam and Jal disappointed Chennaiites as they got sheared off near the coast. Wind shear around the current system has reduced prominently, favouring significant rains to North Tamil Nadu.”

The strong winds, which may break the record of 22 years, could be more severe than in any of the recent cyclones. “Despite witnessing a landfall at Chennai, the peak wind speeds of Nilam and Jal were 74Kmph and 61Kmph respectively. Devastating winds above 100 kmph could be witnessed when the severe cyclonic storm makes a landfall,” said weather blogger, Pradeep John.

During the time of landfall, storm surge of above 1 metre can be witnessed. Contradicting the Indian Meteorological Centre’s statement on experiencing heavy rainfall in the state, astro meteorologist, S. Ramachandran claims that the city would receive moderate rains on Monday. “The city would receive moderate rains which would not exceed 7 – 8cms as the cyclone will weaken in the sea. It will cross Chennai coast as a depression,” said Ramachandran, who follows Vedic meteorology.