Hyderabad reports 79 cases, highest so far in a day 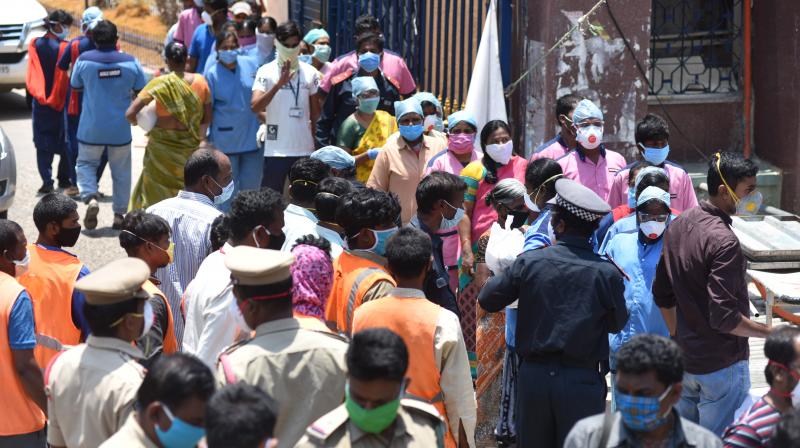 Physical distance norms were thrown aside when free rations were supplied to staff of Gandhi Hospital in Hyderabad on Monday, May 11, 2020. The hospital is the main designated facility for treatment of Covid-19 patients in Hyderabad. (AA Photo: SSR)

Hyderabad: Monday was the worst day yet for Telangana with 79 coronavirus positive cases being reported, all from Hyderabad.

With this, the number of cases in the state has risen to 1,275. The health department in its daily bulletin on Monday did not report any further fatalities and the toll remained static at 30.

Almost all the new cases were reported from the Old City of Hyderabad and included at least 13 children under the age of 15. Many of the cases were from a few families. It is learnt that Shaikpet mandal is one of the worst-hit with more than 60 cases since Sunday.

The surge of 79 new positives breaks a sequence of low numbers since April 21 when 56 cases were reported. That week Telangana changed its testing policy and the daily numbers dwindled to single digits on a few days.

Also, the serious spike in Covid-19 cases on Monday came amidst worries among Greater Hyderabad Municipal Corporation (GHMC) officials over the watered down containment policies adopted by the state government. Over the past few days, containment zones have been reduced from blocks of residential areas to individual homes and apartment complexes.

Also, in a possible acknowledgement of the severity of the coronavirus spread in Hyderabad, chief minister K Chandrashekar Rao, according to a news release from his office, called for increased vigilance and efforts to contain the disease.

Significantly, according to the release, the chief minister called for testing of all primary contacts of every confirmed Covid-19 patient.

This signals a reversal of a recently reported plan by the health department that it will stop testing of primary contacts too. Previously, in the last week of April, it announced that it would stop testing the secondary contacts of Covid-19 positive individuals.