Education minister Ram Bilas Sharma admitted that there have been lapses on part of the school administration. 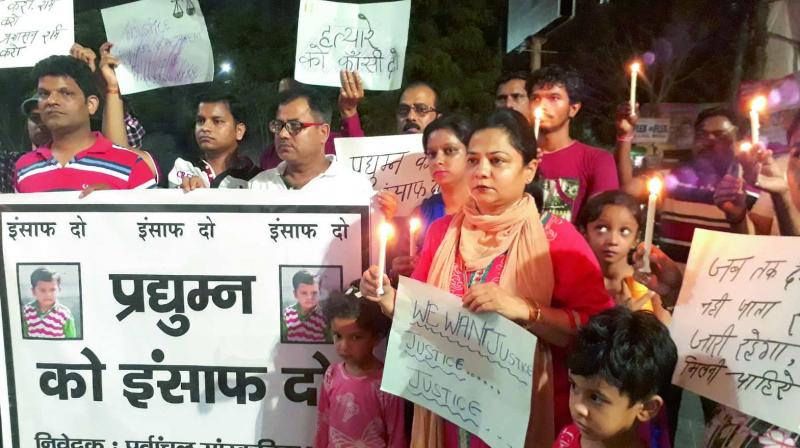 Residents of Delhi-NCR take part in a candlelight march on Sunday to seek justice for the boy who was killed in Ryan International School in Gurgaon. (Photo: G.N. Jha)

Gurgaon: Hundreds of parents staged a demonstration outside Ryan International School in Gurgaon on Sunday demanding a CBI probe, even as the Haryana government said that it was not averse to ordering a CBI probe into the killing of a seven-year-old boy at the school. It has also asked the Gurgaon police to book the school owner under the Juvenile Justice Act.

The protesters set afire a liquor shop located barely 50 metres away from the school. They alleged that school drivers and conductors often consume alcohol from the liquor shop in their free time.

The police used batons to quell the protest and detained 20 protesters. Cameras of some photojournalists were also damaged during the protest.

Education minister Ram Bilas Sharma admitted that there have been lapses on part of the school administration.

“We accept negligence on the part of Ryan International School, but the school cannot be derecognised as the future of 1,200 students is at stake,” Mr Sharma said.

“We have directed the Gurgaon police to book the owner of Ryan International School, Albert Pinto, under Section 75 of the Juvenile Justice (care and punishment act) Act, 2015, for punishment for cruelty to child meted out by the custodian in the charge sheet to be submitted in the court within 7 days,” Mr Sharma said.

The education minister said that some loopholes in the security are visible in the case and the toilet window was also found broken from inside. He further added that the chargesheet in the case will be ready within a week as police was speedily conducting the probe. However, he stressed that if the parents of the child insist on a probe by the CBI or any other agency, the government will accede to their demand.

“We are issuing directives in this regard to all schools, including private ones,” he said.

“We held a meeting in which the demand to derecognise the school came up, but we also had to take into account the fact that 1,200 students are studying there. The parents of students studying in this school were against this step and therefore we felt taking such a step will not be right,” he added.