With up to 30 deaths reported every day, the Shia community has run out of burial space 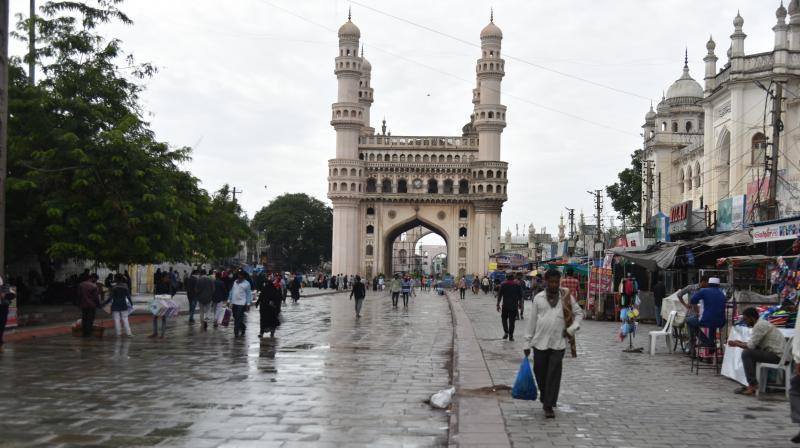 Every day, funeral processions are telecast on local cable TV channels in the Charminar area of the Old City. (DC Photo: SSR)

Hyderabad: The number of deaths in the Old City of Hyderabad has been climbing in the past few weeks. It is witnessing 20-30 deaths a day, most of them due to heart attacks, pneumonia and breathing problems, apart from COVID-19. Burials are going on late at night. Local cable networks and websites are telecasting funeral processions of prominent fatalities.

One woman, speaking on the condition of anonymity, said WhatsApp groups in her locality have been buzzing with news of deaths in recent weeks. Bodies are being buried as soon as the death occurs.

The body of one well-known man was brought in a procession of cars and bikes for burial. “Graveyard workers are working extra hours because of the numerous deaths. We have been watching processions and burials on websites or local cable TV,” the woman said.

This is because in the past few days deaths in the Shia community have been on the rise, averaging about 15 a day. The Shias have only one graveyard, Taira Hazrat Mir Momin R.A. at Sultan Shahi in Moghalpura.

A money transfer agent operating in one of these areas said that within his circle of friends, he had witnessed at least 10 deaths. “June was bad. In July 30 deaths have occurred of people I know,” he said.

A businessman said a jewellery shop owner had died on Thursday in the Kali Kaman area. The very next day on Friday, his brother died. The cause of the deaths was said to be pneumonia.

According to clippings on social media, a graveyard in Chanchalguda buried 200 dead bodies in one week. Another graveyard buried 40 in the same week. A graveyard in Barkas is burying at least 10 bodies each day. A graveyard in First Lancer witnessed 30 burials on Friday alone.