Three get death for rape and murder of Pune techie

Not a single witness turned hostile in the case. 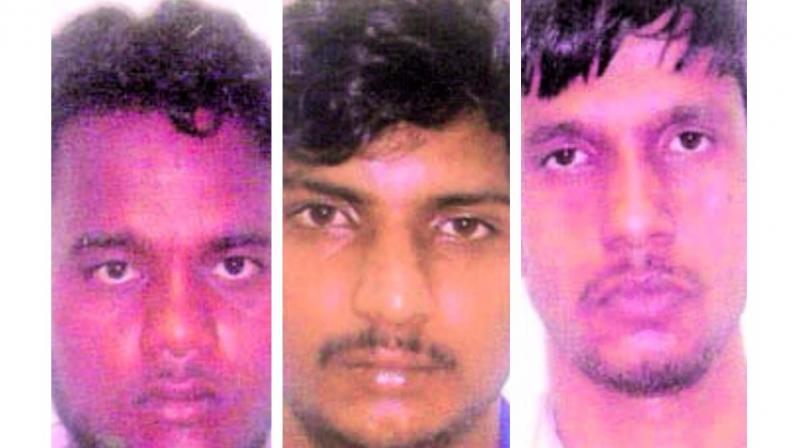 Pune: A Pune sessions court on Tuesday awarded the death penalty to three men accused of kidnapping, raping and killing a software engineer, Nayana Pujari (28), in 2009, calling it a “rarest of rare” case of brutal gang rape and murder. The accused were convicted for their alleged crimes on Monday while the fourth accused was released as he had turned approver.

Pujari’s family members were emotionally overwhelmed while a few others who were present at the court applauded at length after the announcement of the judgment.

According to special judge L.L. Yenkar’s verdict, the three convicts — Yogesh Ashok Raut (24), Mahesh Balasaheb Thakur (24) and Vishwas Hindurao Kadam (26) — are to be hanged till death under sections 120 B (criminal conspiracy) and 302 (murder) of the Indian Penal Code (IPC). “They are given life imprisonment under section 376(2G) of the IPC for gang-rape and they need to pay Rs 5,000. If the fine is not paid, they have to undergo one-year rigorous imprisonment (RI). They are awarded seven years’ RI for IPC section 397 for robbery. They are also awarded two years’ RI (under) sections 404
and 120 B of the IPC. They are also given seven years’ RI under section 366 of the IPC for abduction and a Rs 2,000 fine. If the fine is not paid, they have to undergo six months’ RI,” the judge said.

The judge observed that the three convicts had taken the life of an innocent woman. “She was in a helpless and hapless condition. The convicts have committed offences under IPC sections 366, 376 2 G, 302, 404, 120 B. The same was registered against them in the Vishakha Mandal case. This is clear that the convicts are hardened criminals,” she said.

Noting the sadistic manner in which Pujari was raped and killed, the judge added, “They later threw her body in a deserted forest. It is unfortunate for Nayana and society at large, as the crime was committed in a brutal and gruesome manner. Forty per cent of women working in the IT sector were shocked and are feeling insecure due to the incident. The case has impacted the community, society and working women. Such a crime is not good for humanity and society.”

The judge further said, “The crime was not committed under emotional disturbance. The brutality of the convicts shows their intent… All circumstances are proven, and the contention of the accused regarding the quantum of punishment are irrelevant and all are aggravating circumstances. So this case comes the under ‘rarest of rare’ and the accused must be given death sentence.”

A unique feature of the case is that not a single witness turned hostile. Special public prosecutor Harshad Nimbalkar, while arguing for the death sentence referred to six cases where the Supreme Court had awarded death sentences, including the recent Delhi gang rape verdict.

He had said, “This is the rarest of rare case and three convict are sex maniacs as they had raped her one after another in a car. They moved her in naked condition for more than six hours. Later they killed her. If they are given (anything) less than the death sentence they will inspire other.”

Reacting to the verdict, Pujari’s sister, Manisha Ganabawale, said, “We are happy that Nayana got justice today after eight years though the approver should have received some sentence, if not death or life imprisonment.” Pujari’s husband said, “We are happy that justice has finally been delivered. I am thankful to my family, which has stayed by my side for eight years.”