Eyewitness said that main drainage hole was blocked due to dumping of trash including plastic bags and empty beer bottles. 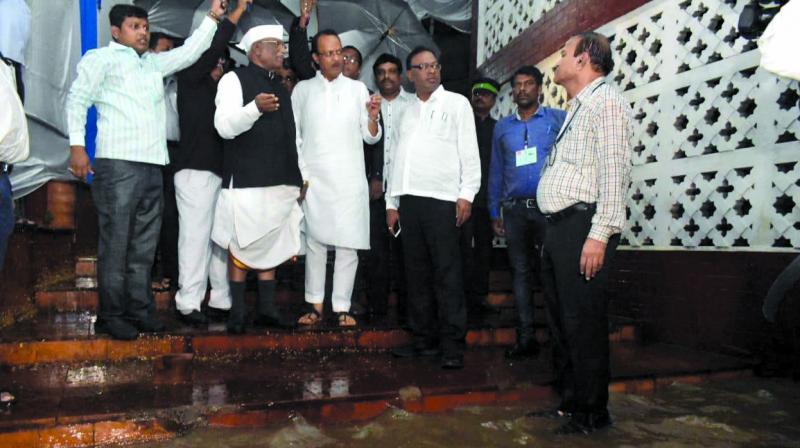 The flooded premises of Vidhan Bhawan.

Nagpur: The Shiv Sena, which is part of the state’s ruling alliance, and the Opposition parties on Friday slammed chief minister Devendra Fadnavis’s decision to conduct the Monsoon Session at Nagpur and for the cancellation of the proceedings of the House on Friday due to a power failure. Energy minister-Chandrashekhar Bawankule clarified that power supply was cut due to waterlogging near electrical installations, which would have created problems in the system, so the power supply was stopped at 10 am and restored at 11.22 am.

Eyewitness said that the waterlogging in the backyard of Vidhan Bhawan was due to dumping of trash including plastic bags and empty beer bottles near the main hole, which blocked the flow of water, and it reached a high level close to electrical installations. Sensing danger from the live power supply and rains, the staff put off the power supply that led to darkness in the entire Bhawan premises. Some emergency lights helped the insiders to come out of Hall. Shortly before noon the power supply was restored and Legislative Council was adjourned for the day.

The water was removed using pumps and the power supply was restored at 11.22 am, said Mr Bawankule.

Shiv Sena MLA Sunil Prabhu, meanwhile, blamed BJP government for the blackout, “When heavy rain lashes Mumbai and waterlogging is reported, Sena-ruled BMC is blamed for the mess. Today we witnessed the same situation, which halted the proceedings of the house. It has exposed the administration of Nagpur corporation which is under BJP.”

Leader of Opposition Dhananjay Munde and Nationalist Congress Party (NCP) leader Ajit Pawar also criticised Mr Fadnavis for conducting the Monsoon Session in Nagpur instead of Mumbai. Mr Munde said the Opposition had cautioned the government during a coordination meeting.

Meanwhile, the Nagpur city on Friday received the heaviest rainfall of the season. Vehicular traffic was diverted in many places and roads leading to Dr Babasaheb Ambedkar International Airport were closed for traffic. The traffic on busy Nagpur-Hyderabad na-tional highway via Wardha was also closed for traffic due to waterlogging and congestion.