The FIR alleged that “provocative” speeches were made to “promote” enmity. 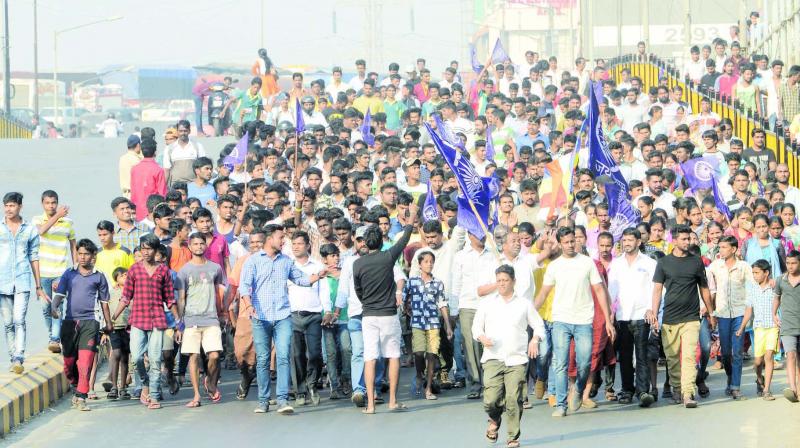 The complaint stated that the “inciting speeches and presentations” led to the violence.

MUMBAI/PUNE: The five activists arrested by the Pune police from Mumbai, Delhi and Nagpur on Wednesday morning in the Bhima-Koregaon violence, have been booked under the Unlawful Activities (Prevention) Act (UAPA) and relevant sections of the Indian Penal Code. One of the five accused, Sudhir Dhawale, was nabbed in Mumbai and taken to Pune on Wednesday afternoon after being grilled by the Pune cops for close to seven hours. Pune police said that they have allegedly established the activists’ links with naxals.

Meanwhile the FIR in the Bhima-Koregaon violence was registered against Sudhir Dhawale, Sagar Gorkhe, Harshali Potdar, Ramesh Gaychor, Deepak Dengle and Jyoti Jagtap, a police official said. The complainant had alleged that the “provocative” speeches and presentations made during the entire programme “promoted” enmity between two groups. The complaint also had stated that the “inciting speeches and presentations” led to the violence.

On January 8, an FIR against seven activists, including Dhawale and members of the Kabir Kala Manch, was lodged for causing violence on January 1, a day after the Bhima-Koregoan event.

The accused in this FIR were part of the organising committee of Elgar Parishad held at Shaniwarwada on December 31, during which inciting speeches were allegedly made.

Harshali Potdar, another organiser of Elgar Parishad and a Republican Panther member, alleged that there was a conspiracy against dalit activists.

“Dhawale’s arrest was made without any explanation and at an odd time, early morning at 6.30 am. On one hand, the police are giving a clean chit to people like Bhide, on the other they are arresting Dalit activists,” she said.

Who are these accused?

Sudhir Dhawale: A prominent dalit activist, an Ambedkarite, who founded the Republican Panthers Jatiantachi Chalwal (annihilation of caste) and is the editor of the fortnightly magazine Vidrohi.

Rona Wilson: A native of Kerala, he is currently based in Delhi and is the public relations secretary of the Committee for Release of Political Prisoners (CRPP). He has been active in campaigning against laws like UAPA and Armed Forces Special Power Act (AFSPA).

Surendra Gadling: A lawyer based in Nagpur, he is general secretary of Indian Association of People’s Lawyers. Known to be a tribal
and dalit rights activist, he has been providing legal aid to those arrested for Maoist links, including Saibaba and Dhawale.

Shoma Sen: The Nagpur-based activist is a professor for English at the Nagpur University. She has been under the scanner of investigating agencies for her alleged links with the left-wing extremists. She was present for the Elgaar Parishad in Pune.