3 killed after hoarding on railway premises collapsed on road

The 40-feet hoarding and the iron frame holding it collapsed on vehicles which had stopped at traffic light at Shahir Amar Shaikh Chowk. 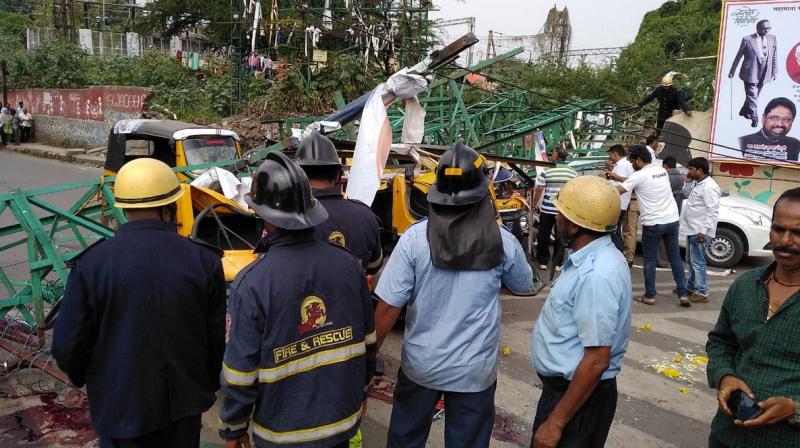 Fire brigade officials said that five auto-rickshaws, one two-wheeler and one car were damaged in the accident. (Photo: Twitter | ANI)

Pune: Three people were killed and six injured when a huge hoarding standing on the railway premises collapsed on vehicles on the adjoining road in Pune on Friday.

The 40-feet hoarding and the iron frame holding it collapsed on vehicles which had stopped at the traffic light at Shahir Amar Shaikh Chowk near Pune Railway Station, police said.

"Around 2 pm, the hoarding was being dismantled by a contractor hired by the Railways when it came crashing down," said B Singh, Deputy Commissioner of Police.

The deceased were identified as Shamrao Kasar (70), Shamrao Dhotre (48) and Shivaji Pardeshi (40), he said. There seemed to be some negligence on the part of the contractor, Singh said, adding that a case will be registered under relevant sections of the IPC.

Fire brigade officials said that five auto-rickshaws, one two-wheeler and one car were damaged in the accident. The injured were rushed to the nearby government-run Sassoon General Hospital.

"Since it was afternoon, there was not much traffic. Had there been more traffic, there would have been many more casualties," said a local resident.

A Central Railway official said it has initiated an inquiry. "We have constituted a high-level committee to probe the incident," said Milind Deouskar, Divisional Railway Manager, Pune.

The Railways had given a contract to an outdoor advertisement agency to put up hoardings on the railway premises a few years ago, but as the agency did not follow safety norms, it was asked to remove the structures, he said.

Some mistake took place while removing the hoarding near the Amar Shaikh Chowk and instead of falling on the railway premises it fell on the roadside, Deouskar said.

The Railways will provide compensation to the families of the deceased and medical help to the injured, he said.