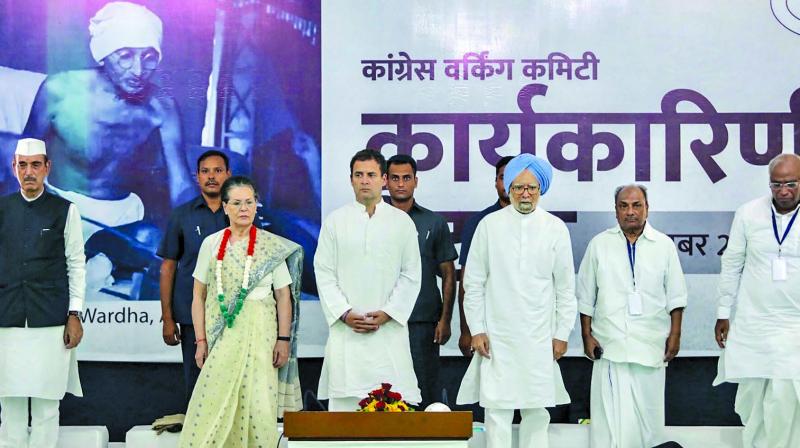 Nagpur: The Congress will soon launch a “second freedom movement” against the “misrule and misdeeds” of BJP government at the centre.

At the historic Congress Working Committee (CWC) that was held at the Gandhi Ashram at Sevagram about 80 kms from Nagpur, the party vowed to counter the Narendra Modi government’s “hate and violence” ahead of the 2019 general elections. It was coincidence that the Mah-atma Gandhi’s Sevagram Ashram in Wardha, where once the century-old party had given a “Quit India Movement” call against the British Raj in 1942, hosted its third CWC (second in 1948), gave clarion call to oust the BJP which was “spreading hatred in the country”, saying the same reason had led to the assassination of Mahatma Gandhi.

The CWC held at the Mahadev Bhavan at the Sevagram campus, presi-ded over by Rahul Gandhi, around noon passed two resolutions recalling the contribution of Mahatma Gandhi to the “Indian thought process, its soul and body” and late Lal Bahadur Shastri’s call of ‘Jai Jawan, Jai Kisan’ is not just a slogan but a way of life on the occasion of their birthdays.

The CWC resolution said, a new freedom struggle is the urgent need of the hour – a massive movement to combat the forces of divisiveness and prejudice, to confront the Modi government whose politics is of threat and intimidation, polarisation and divisiveness, crushing de-bate and dissent, imposing an artificial uniformity in a nation of extraordinary diversity, hate and vendetta, subverting all constitutional values, principles and practises, lies, deceit, fraud and subterfuge.

The CWC further said, only the Congress that is deeply committed to the principles of justice, liberty, equality, and fraternity, laid down in the Preamble of the Constitution. The CWC resolves that this fundamental message mu-st be renewed and propagated to all corners of India, especially to the yo-unger generation, by eve-ry member of the Cong-ress party. Most importantly, the CWC takes insp-iration from the Mahat-ma’s unyielding commitment to listen to every voi-ce, to defeat the forces that are dominating today.