Around 5K booked for Chakan violence

The protest at Chakan took a violent turn in afternoon, when the agitators torched over 30 vehicles and damaged over 100 buses. 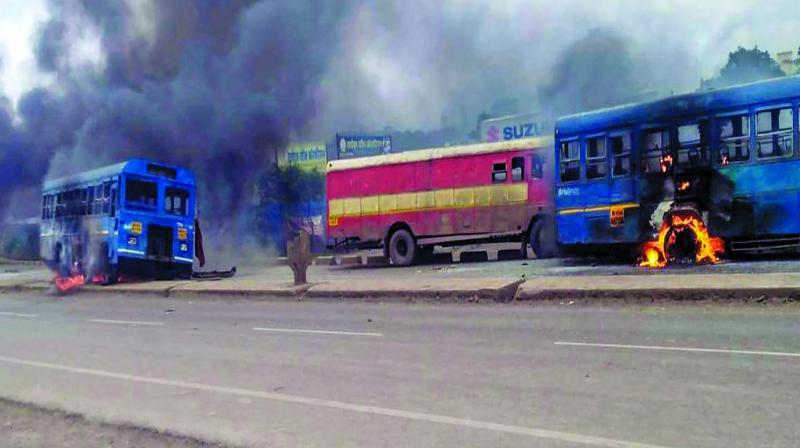 The agitators attacked the police station in which eight police officials were injured. (Photo : PTI)

Pune: A day after protesters seeking Maratha reservation indulged in violence and attacked the Chakan police station, the Pune police registered two cases against 5000 unidentified persons under sections related to attacking government officials and rioting. Pune police also said that the vandals  were outsiders and not local residents.

Dayanand Gawade, police inspector, Pune rural police, said, “We have lodged two FIRs with Chakan police against over 5000 unidentified people for various IPC sections including 353 for attacking government officials, 144 for riots among other sections. Relevant sections of National Highway Act, Green Tribunal Act and Prevention of Damage to Public Property Act have also  been invoked against rioters. We are trying to identify people who were involved in the riots, by using videos and mobile clips of riots.” He added, “We want people to send the videos of riots to Pune rural police and their names would not be revealed.”

Sandip Patil, superintendent of police, Pune rural police said, “As per our investigation, the rioters were outsiders and not local residents of Chakan.”

The protest at Chakan took a violent turn in afternoon, when the agitators torched over 30 vehicles and damaged over 100 buses. The agitators attacked the police station in which eight police officials were injured. They also block-ed the roads to Khed, Nashik and Pune. Police had to impose CrPC 144 after 4 pm. Revenue officials said that the losses caused in Chakan riots would be around `8 to `10 crore.

Meanwhile, protests were held in Pune on Tuesday. Bandh was called at Urali Kanchan and rallies were held at various parts. An agitator was arrested for attacking police in Mundhwa in Pune.