There are 115 containment zones in the Greater Hyderabad area 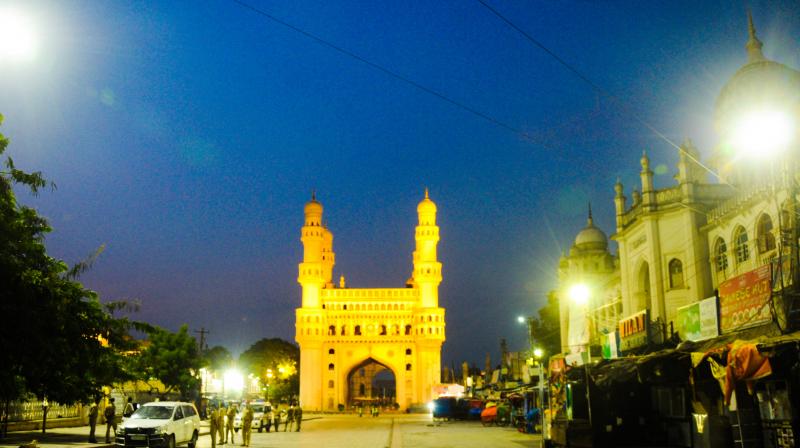 The area around Hyderabad's iconic Charminar is deserted on Thursday evening. On Ramzan evenings, the locality is normally abuzz with acctivity. (DC Photo: Deepak Deshpande)

Hyderabad: Telangana reported 22 new coronavirus positive cases and three Covid-19 deaths on Thursday, giving the lie to the low figures reported in previous days. The spike shows state has not yet won its battle against Covid-19.

The number of Covid-19 cases stood at 1,038 and the toll at 28. Thirty-three patients who made a full recovery were discharged on Thursday. There were 568 active cases in the hospitals on Thursday and the number of discharged patients stood at 442, the government said.

With 115 containment zones as on Thursday evening, Hyderabad continues to be the epicentre of Covid-19 in the state.

Jolted by the spike in cases after a lull of a few days, chief minister K. Chandrashekar Rao ordered an urgent meeting be held to review steps to control the disease in the Greater Hyderabad area.

There was a lot of concern, in particular, over the market in Malakpet with two persons, residents of Pahadisharif and Jalpalli, spreading the disease to owners of three shops who in turn, infected members of their families. The Gunj area and Pahadisharif have now been declared as containment zones.

The press release said the three Covid-19 positive patients who lost their lives on since Wednesday, had died within hours of being admitted to Gandhi Hospital.

A 44-year-old woman from Durganagar in Jiaguda was brought on a ventilator to Gandhi Hospital on Wednesday. A 48-year-old man from Ramantapur who died within 12 hours of admission was a diabetic, suffered from obesity and had pneumonia, the release said. The third patient to have lost his life was a 76-year-old man from Vanasthalipuram who was suffering from heart and kidney disease and pneumonia.

The news release, quoting Rajendar, said the minister expressed satisfaction that the Central team which was in the state to inspect Covid-19 treatment and containment measures was all praise of the state government’s efforts as per the statement in New Delhi by joint secretary of the Union home ministry Salila Srivastava. “There is no more any scope or possibility for any criticism of Telangana’s efforts to contain the disease,” the release quoted Rajendar as saying.