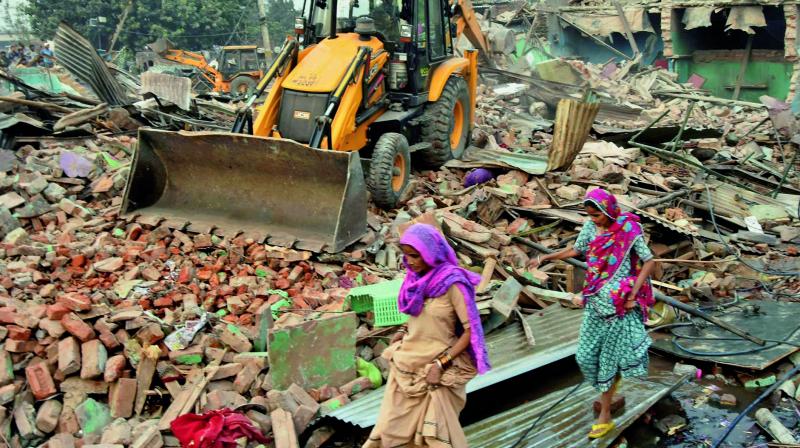 Delhi Development Authority bulldozers carry out demolition work at Kathputli Colony in New Delhi on Monday. Residents later in the evening blocked a key road to protest against the drive. (Photo: PTI)

New Delhi: The Delhi Development Authority on Monday began a demolition drive at west Delhi’s Kathputli Colony, triggering clashes among its residents, activists and the police.

CPI leader Annie Raja was injured during the agitation, following which she was taken to the RML Hospital.

However, the police and the DDA denied using any force against the protesters. Sanjeev, an activist with the National Alliance of People’s Movements (NAPM), alleged that police personnel and DDA officials did not allow people to even take out their belongings before bulldozing their homes.

The resistance stems from apprehension in people’s minds regarding DDA’s assurance that the private builder with which it has entered into an agreement will build multi-storeyed buildings in the same spot within two years, he claimed.

“The Delhi high court in 2014 had stated that the DDA cannot forcibly evict people from their homes. People also do not want to shift to the transit camp in Anand Parbat as the facilities are below par,” Sanjeev said.

Annie Raja’s husband and CPI leader D. Raja alleged that she was “punched, beaten and dragged by the police.

Sneha Lata, a member of the Delhi Solidarity Group claimed that Annie Raja was found lying near a dustbin.

Meanwhile, minister of housing and urban affairs Hardeep Singh Puri on Monday asked the Delhi Development Authority (DDA) to expedite verification of the claims of 771 applicants, rejected earlier for a house, under redevelopment of Katputli Colony in New Delhi. Mr Puri also spoke to L-G Anil Baijal in this regard.

On the 25th of this month, DDA has requested the residents of Katputli Colony to vacate the colony and accordingly also arranged vehicles.