Yamuna continues to rise, Kejristeps in to help affected people

10,000 people evacuated to safer places; traffic in a mess as bridge closed. 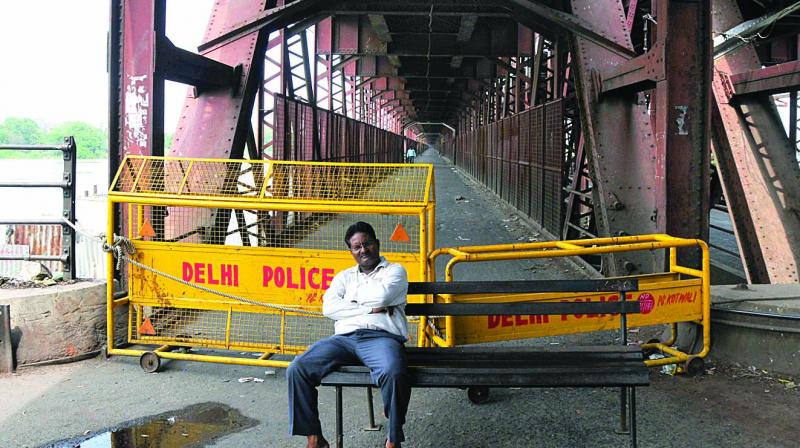 A man sits near police barricades at the Old Yamuna Bridge near Red Fort on Monday. The bridge has been shut after Yamuna crossed the danger mark. (Photo: Bunny Smith)

New Delhi: The water level in Yamuna continued to rise and stayed over the danger mark for the third day on Monday, prompting Delhi chief minister Arvind Kejriwal to direct officials to make arrangements for the affected people, even as around 10,000 people have been evacuated to safer places.

The river was flowing at 205.78 metres on Monday  evening with the danger mark being 204.83 metres, officials said.

Even as the officials said the peak water level is expected to reach 206.50 metres, a political blame game started over lack of proper rehabilitation of people who were left on streets after water entered their houses.

Around 10,000 people have been evacuated due to rising water levels and shifted to tents set up at safer places, a government official said.

A total of 1,149 tents have been set up to accommodate the evacuated people. So far, 8,635 people are living in these tents. Food and medical help is also being extended to them, he said.

After the chief minister’s order, revenue minister Kailash Gahlot visited the affected areas and directed officials to ensure all proper arrangements were made. Traffic movement on Old Yamuna Bridge in Delhi was closed on Sunday after the water level in the river rose due to rains. On Sunday evening, the river was flowing at 205.5 metres.

Passengers were advised to plan their journey keeping in mind the extra time they would require to reach their destination, Joint Commissioner of Police (Traffic) Alok Kumar said.

“As the water level in the Yamuna river breached the danger mark, the Shahdara district magistrate issued orders for the closure of Old Yamuna Bridge. Accordingly, we have diverted the traffic towards Geeta Colony flyover and ITO,” he said.

Old Yamuna Bridge, colloquially known as ‘Lohe Ka Pul’, is a road-cum-rail bridge on the Delhi-Howrah line that was built over 150 years ago.

It serves as a major connectivity link between Delhi and the neighbouring states. Commuters faced long delays as they were stuck in jams on Geeta Colony flyover on Monday morning.

“I was stuck in traffic for over 30 minutes. Usually, It takes me only 20 minutes to reach my office in Lutyens’ Delhi but today it  took me over an hour to reach the same destination,” said a 27-year-old media professional Samar Mehta. He added that the service lane in Mayur Vihar Extension was occupied by people who had to move there and put up tents since their homes were inundated with water. “Usually, the two-wheelers ply in the service lane but today, they were part of the traffic on the main road which led to further chaos,” he said.

Meanwhile, discharge from the Hathnikund Barrage between 6 am and 9 pm was 5,13,554 cusecs, with water level expected to rise further.