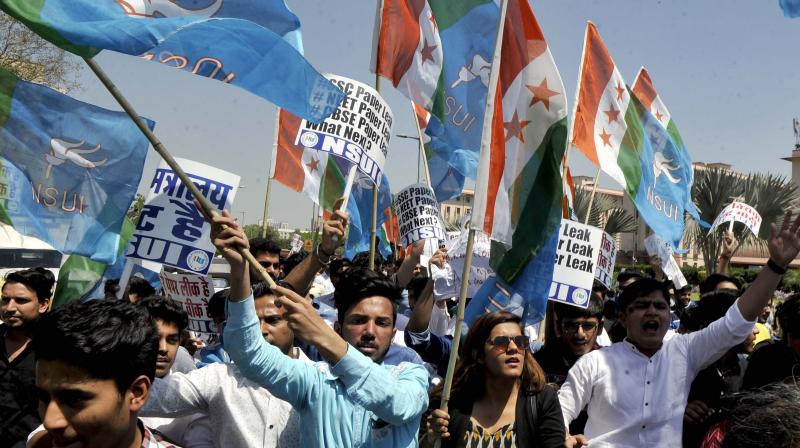 New Delhi: Protests against the CBSE paper leak and the board’s decision to re-conduct the exams continued on Friday with students and Congress youth leaders accusing CBSE of negligence.

While some students gat-hered at the Parliament Street and some protested outside the CBSE (Central Board of Secondary Edu-cation) headquarters in Preet Vihar in East Delhi, members of the Congress’ National Students Union of India (NSUI) began marching towards Union HRD minister Prakash Javadekar’s residence. They were, however, stopped on the way.

Meanwhile continuing its probe into the alleged CBSE paper leak, a team of Delhi police allegedly said to have learnt from the parents of the students that the papers had been leaked on WatsApp where they were members. The Central Board of Secondary Education (CBSE) has submitted to the police details of the examination centres sou-ght by its crime branch

The NSUI also demanded that students should not be forced to take the retest. Though the NSUI march was stopped at the Udyog Bhawan Metro station, a short distance from Javadekar’s Kushak Road residence, NSUI president Fairoz Khan and DUSU vice-president Kunal Sehrawat were taken by the police to meet the minister.

Scores of students also protested against the CBSE’s announcement to re-conduct the Class 12 Economics and Class 10 Mathematics papers, following reports of paper leak.

Many students claimed that almost all the papers had been leaked a day before the examinations and demanded that if a re-examination is to be held, it should be done for all the subjects.

A delegation of the RSS-backed ABVP also met the Union minister, raising similar demands including necessary procedural changes to ensure “leak-proof” exams and early declaration of the retest dates keeping in mind other competitive exams, said a leader.

The Congress’ Delhi wing, DPCC, shouted slogans outside the CBSE headquarters, demanding an independent investigation into the issue.

“This is unjust for students who prepared so hard for the exams. Now owing to the mischief of some of them, every student will have to undergo the pressure again,” said a parent participating in the protest.