Scheme may be extended to senior citizens, students: Arvind Kejriwal. 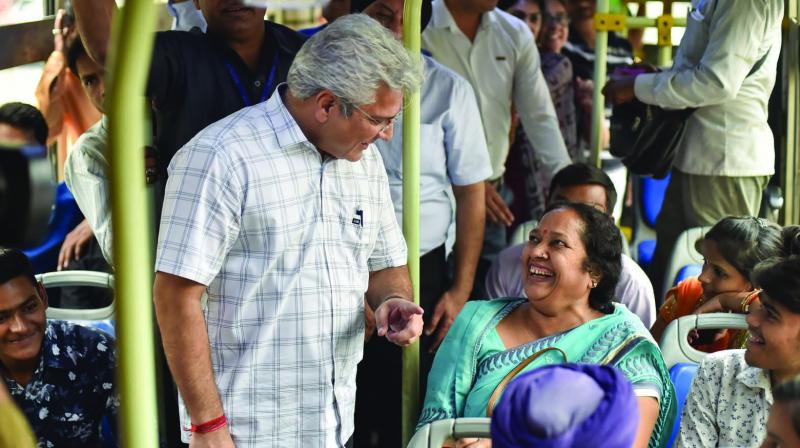 New Delhi: The free of cost travel scheme for women in Delhi public buses began on Tuesday with chief minister Arvind Kejriwal saying that the scheme might be extended to senior citizens and all students.

Mr Kejriwal’s deputy Manish Sisodia said that the scheme will ensure safety for women and increase their role in the national capital’s economy.

Women were given pink tickets in Delhi Transport Corporation (DTC) and cluster buses to avail the free-ride scheme, which started on Bhai Dhooj. The Delhi government will reimburse transporters based on the number of pink tickets issued.

Most women commuters hailed the move, saying it will encourage them to take public transport, ensure their safety, and help them save money at the same time.

A section of women commuters, however, questioned the sustainability of the scheme, saying it comes nearly three months ahead of the Delhi polls and wondered whether the next government will continue this programme.

“I frequently travel by DTC buses. I am happy that free travel will help me save about Rs 1,000 every month,” Lajwanti Jha, a resident of Khanpur, said.

She, however, wondered whether the government would continue to provide free rides to women after next year’s state elections.

Chirag Dilli resident Sushma said that the move had encouraged many women in her area to use public transport. “Now, my appeal to Kejriwal ji is to provide free rides to women in Metro also,” she said.

“I am happy that women are being provided free rides in the public transport. But the government should ensure that the frequency of buses is increased on busy routes,” Mayur Vihar Phase-1 resident Deepti Gupta said.

Jayanti, a resident of Patparganj Industrial Area, said that many poor women would definitely benefit from this scheme. She, however, appealed to the government to provide free rides to the jobless youth also.

According to the chief minister, the scheme will help in women empowerment by bridging the gender gap that exists in society. On his mobile application ‘AK App,’ he said: “Now, girls and women, who had to drop out of schools and colleges because of high transportation costs, don’t need to sacrifice their education. They can now take buses to good schools and colleges that are away from their homes. Similarly, women, whose offices are far, need not worry about transportation cost.”

Bus rides for senior citizens and students might be made free too in the coming days, Mr Kejriwal said on the app, which was launched by him ahead of the Assembly polls.

“Every step cannot be completed at once. We will definitely do it. Let us start with women and see the results. Based on the result we will definitely deliberate on making these rides free for senior citizens and students too in the future,” he said.

The AAP national convenor slammed his rivals for questioning his plans to provide such facilities to citizens, saying some things need to be “above politics” and these parties need to realise this.

On Monday night, the government issued a notification implementing the free-ride scheme from Tuesday.

The Delhi Cabinet had, on August 29, given in-principle approval to the scheme of providing free bus rides to women. However, it put a rider on female employees of the city government that they have to give up their transport allowance to avail the facility.

Female employees of the Delhi government, local bodies, and undertakings will not be entitled for transport allowance if they opt for free ride in DTC and cluster buses, according to the government. According to the latest official figures, public buses in Delhi carry over 45 lakh passengers each day.