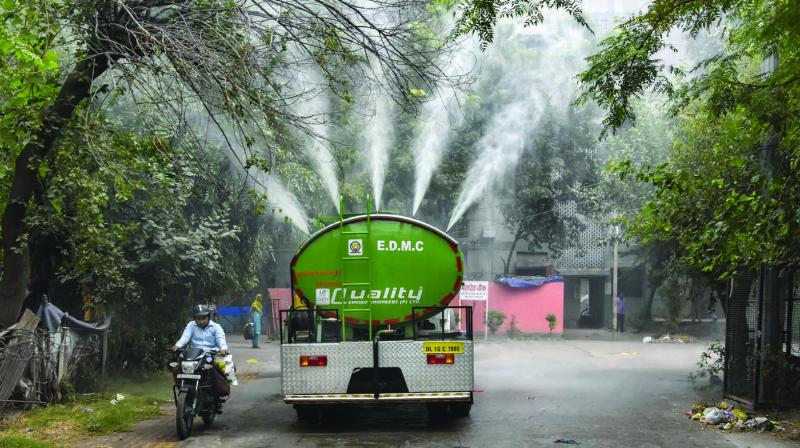 New Delhi: As the air quality in Delhi entered the second-worst ‘severe’ category on Tuesday, chief minister Arvind Kejriwal appealed to Punjab and Haryana “with folded hands” to take concrete steps against stubble burning to prevent the national capital from becoming a “gas chamber.”

According to government data, Punjab and Haryana recorded an increase of at least 2,400 farm fires, a major contributor to air pollution in Delhi, till October 27.

Mr Kejriwal said the Delhi government is taking all steps to reduce pollution. “At our level, we are making all possible efforts and will continue to do so,” he tweeted in Hindi.

Later, the Delhi government said in a statement that the latest NASA images show a drastic spurt in crop residue burning in the neighbouring states. The stubble plume from Northwest regions has become one of the significant factors in adversely affecting Delhi’s air quality.

“The effective stubble fire counts of Haryana and Punjab have increased from 1,654 to 2,577 during the past 24 hours, which is a matter of extreme concern for the residents of Delhi,” it stated.

Several parts of Delhi were experiencing ‘severe’ air pollution on Tuesday. Anand Vihar was the most polluted area with an air quality index (AQI) of 436 followed by Nehru Nagar with an AQI of 430.

Fireworks on Diwali night played an “overwhelming” role in the rapid deterioration of air quality in Delhi-NCR, the Centre for Science and Environment (CSE) report showed on Tuesday.

The report said that the air was much cleaner before Diwali in 2019 as compared to 2018, which “shows the overwhelming role of firecrackers in building the severe peak on Diwali night.”

“From a very clean afternoon, the change to severe pollution levels after 10  pm at night (on Diwali) was drastic. There was a 10-fold jump in PM2.5 concentrations between 5.00 pm and 1.00 am due to bursting of firecrackers,” the report said.