Traffic was bumper to bumper from Wazirabad towards Mukarba Chowk due to the kanwariya movement. 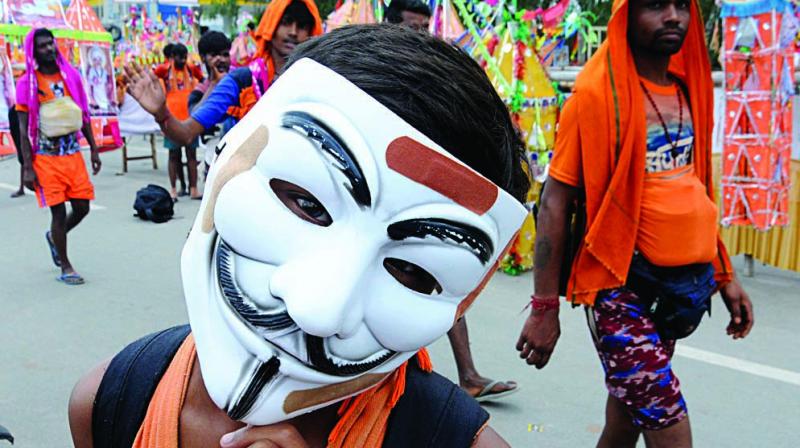 A kanwariya wears mask during the annual yatra in New Delhi on Monday. (Photo: G.N. JHA)

New Delhi: Delhi and national capital region on Monday faced the brunt of slow traffic across the region due to the ongoing Kanwar yatra. People in the Trans Yamuna region were particularly affected by the yatra. The situation is expected to be the same on Tuesday. However, the Delhi traffic police was constantly updating the commuters on Twitter to avoid such stretches and take alternate route.

One of the commuters who was stuck in the jam in Sarita Vihar said he had only traveled 6 km in two hours while another commuter said he was stuck at Raddisson Blue Mahipalpur for two hours on Monday and traffic was not moving even an inch.

However, the Delhi traffic police had earlier on Sunday issued traffic advisory to ensure hassle-free movement of the kanwariyas on July 29 and 30 as scores of Shiva devotees are expected to reach and pass through the national capital from Monday. In view of the past occurrence, the Delhi traffic police has asked the motorists and general public coming from Ashram to avoid Road No. 13A and Agra Canal Road to go towards Noida.

“Motorists and the general public going towards Noida are advised to use DND and plan their journey accordingly,” the advisory said. Those going to Noida from Kalkaji can use Mathura Road via Ashram towards DND. Commuters coming from Ashram can also use DND to reach Noida as traffic from Faridabad has been stopped towards Kalindi, it said. In view of the Kanwar yatra, the Noida traffic police has also informed about the diversions made on the routes as per requirement.