Due to excessive disturbance, their breeding was unsuccessful. 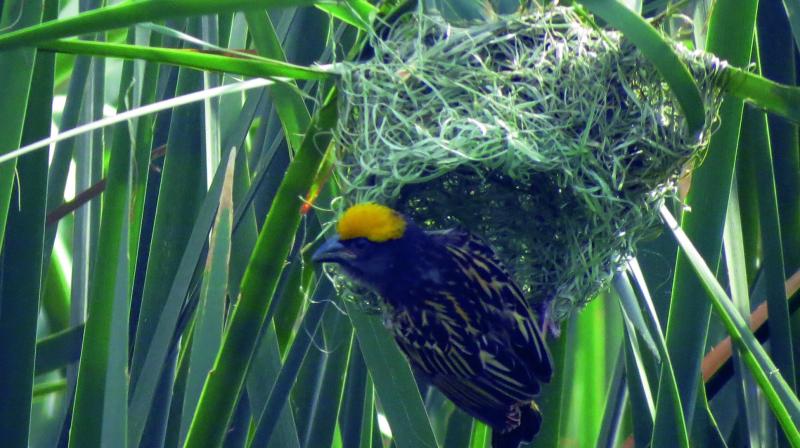 Streaked weavers locally migrate in small flocks every year to their destinations at Okhla Bird Sanctuary, Surajpur wetland, Najafgarh drain area, and a few other reedy wetlands in summer for nesting and breeding.

New Delhi: A flock of streaked weaver has arrived at Okhla Bird Sanctuary this month. According to the birders, weaver birds were more conspicuous here in the 90s. Due to excessive disturbance to the nesting habitats in Okhla, their breeding was unsuccessful last year, ecologist T.K. Roy said.

Streaked weavers have heavily streaked breast and the breeding male has contrast yellow crown. They locally migrate in small flocks every year to their destinations at Okhla Bird Sanctuary, Surajpur wetland, Najafgarh drain area, and a few other reedy wetlands in summer for nesting and breeding. The birds prefer building nests in colonies.

Weaver birds are social and gregarious and their nesting colonies are a treat to watch. Their nests are intricately woven by strips of long leaves or rough-edged grasses. Baya weaver, streaked weaver, black-hearted weaver, and Finn’s weaver are Indian resident species of weaver birds. They used to be seen in Delhi during breeding season till the 90s, Mr Roy said. He added that the weaver birds have had to put up with habitat disruption due to rapid urbanisation.

Mr Roy said that a flock of streaked weaver arrived this month. They are building hanging nests right above the water surface. A large mixed nesting colony of purple herons, gray herons, and black-crowned night herons on the tall reed beds in the isolated middle of the wetland was also seen last week.

Among four species of weaver birds, three species have almost disappeared from Delhi in over a decade, Mr Roy claimed.