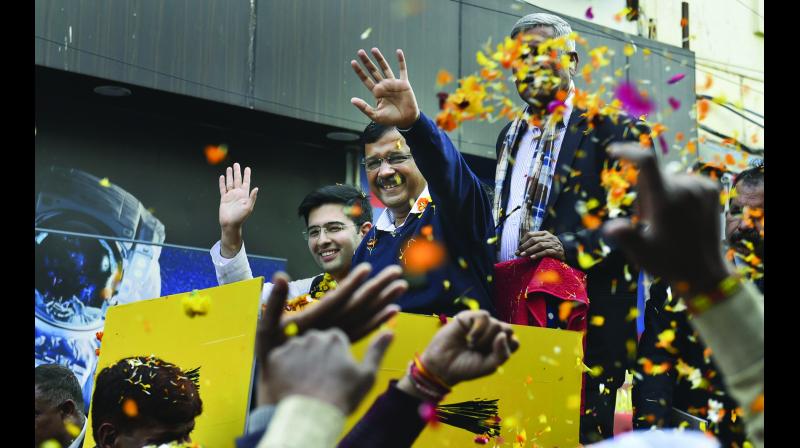 CM Arvind Kejriwal during a roadshow in support of the party candidate Raghav Chaddha in New Delhi on Wednesday. — PTI

New Delhi: With Delhi inching closer to the last phase of campaigning for Assembly elections, the Aam Aadmi Party (AAP), on Wednesday came out with new billboards and posters, depicting chief minister Arvind Kejriwal as the “caretaker” of the city and its people.

Union home minister Amit Shah, who has been fronting BJP campaign for the polls, amped up his attack on Mr Kejriwal by challenging him to take his shirt off and try and take a dip in the Yamuna, underlining that the river continues to be in a state of neglect.

What has come as a short in the arm of Mr Kejriwal are the findings of the neta App ‘’Janata Barometer Survey’, which clearly indicated that the chief minister has managed to please a large section of Delhi’s citizens.

The survey results, based on the responses collected, between January 20-27, from 40,000 respondents across the national capital, enables citizens to vote for their favourite leaders and then change their vote on the app as and when their preferences change.

As per the survey, 86 per cent of respondents were happy with the electricity supply while 76 per cent said they have benefitted from AAP’s free electricity scheme, up to 200 units a month.

When it comes to water supply, satisfaction levels ranged between 62 to 65 per cent. While 63 per cent of respondents were satisfied with the water supplied to their homes, 62 per cent respondents also conveyed satisfaction with the quality of water supplied. The poll also found that 65 per cent respondents were beneficiaries of Aam Aadmi Party’s free water scheme. Union home minister Amit Shah, who stepped down as party president last week, also brought into focus the spike in Delhi pollution and squarely blamed the chief minister for it. “If someone is responsible for the level of pollution in Delhi today, then it is the Kejriwal government,” he said.

The minister also took on Mr Kejriwal’s promise of Europe-like roads for Delhi and said he cannot figure out if there are potholes in the roads or the road is a pothole. In a big makeover plan for Delhi’s overloaded roads, Mr Kejriwal, in October last year, announced that all roads managed by the PWD will be redesigned as per international standards.