On Wednesday, most of the banks in the city continued to face turmoil due to cash crunch. 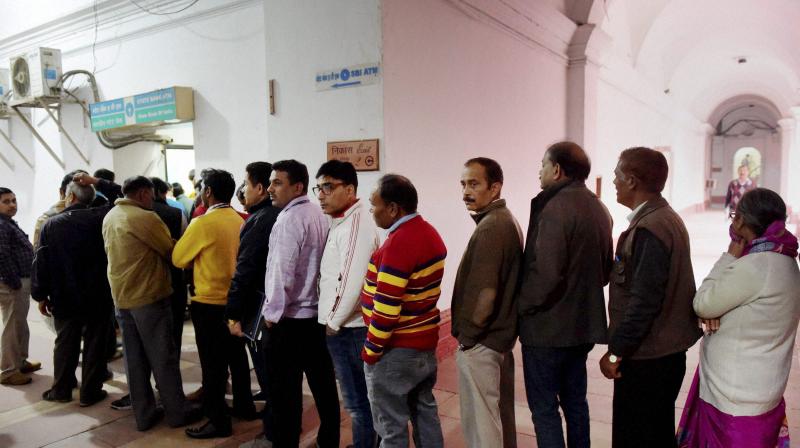 Employees of Finance Ministry stand in a queue to withdraw cash from an ATM at North Block in New Delhi. (Photo: PTI)

New Delhi: If you have luck by your side, you may get cash available in ATMs and banks in national capital these days. The trend that was set on November 9 onwards soon after the demon unleashed by demonetisation is still haunting people who are standing in queues to withdraw money. Alike scores of people, the bankers await for new currency recaliberation from the RBI.

While in a sudden turn of events, on Tuesday, ATMs had cash and there were no queues spotted, courtesy the trend of no cash availability ruling the roost. However on Wednesday, a day after PM Modi’s deadline to cushion the problem breathed its last, most of the banks in the city continued to face turmoil due to cash crunch. While the bankers charged that the currency chests in the banks go dry by 2 pm, the ATMs situated across the city get to see the cash only towards late noon. To make the matter worse, a few of them render cashless soon after they receive cash the same day and have to wait until next day.

In the meantime, the automated teller machines belonging to banks like HDFC, Indusland, Kotak Mahindra and Canara Bank situated in areas like Gulmohar Enclave Community Centre, Saket, Hauz Khas Village Road, South Extension 1 & 2 had no cash since Wednesday morning till 2.30 pm, ATM kiosks of banks such as Punjab National Bank, Kotak Mahindar and Yes Bank in Green Park could see cash only around 3.20 pm onwards.

The situation was no different in areas like Lajpat Nagar, Malviya Nagar and Laxmi Bai Nagar. A bank employee belonging to a nationalised bank said, “The situation has improved as compared to last month in terms of banks receiving cash from the RBI. However, still there is a shortage of currency in flow that further pose a problem,” added the banker on the condition of anonymity.

When asked the reason, a banker told this newspaper, “The banks have been given limited cash to disburse per day/week. While for the branch the government had restricted the withdrawal at Rs 24,000 per account per week, Rs 2,000 per card at ATMs were directed. Bankers are finding it difficult to meet the existing demand as there is no sufficient cash in flow.”

“Though, usually, in banks, cash has been made available, however, it gets emptied soon. Whereas in ATMs the cash doesn’t come at all to be refilled which in turn causing problem,” added he.

To add to the misery, the  flip-flop stances under taken by Finance Ministry and RBI in these 50 days brought about 60 orders/notification/statements on note ban which caught people off guard.