Jantar Mantar: A one-stop spot for all kinds of protests

The mishmash of malcontents includes some who turn up day after day for years and others who camp out overnight to air their grievances. 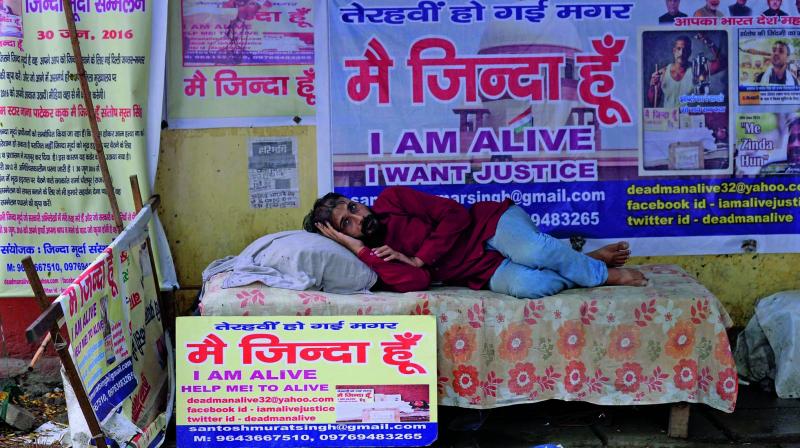 A file picture of a 34-year-old man at his protest site at Jantar Mantar. (Photo: AFP)

New Delhi: At one end of a backstreet in downtown Delhi a group of women hold a vigil to demand rapists be executed, while at the other acolytes of a spiritual leader arrested for sexual assault demand his release.

Anyone seeking a glimpse of the bewildering range of issues animating voters in the world’s largest democracy should stroll past Parliament and head a few hundreds yards north to Jantar Mantar.

Here on any given day, everyone from retired generals to landless widows can be seen holding forth in a tree-lined avenue tucked behind some of the city’s swankiest hotels and most famous landmarks.

Some protests attract crowds in their thousands while other causes are championed by lone campaigners who hand out leaflets to curious passersby.

A stone’s throw from India’s corridors of power and fenced off with barricades, Jantar Mantar carries echoes of Speaker’s Corner in London or the Occupy movement’s takeover of McPherson Square in Washington.

But as the smell of freshly-cooked dosas and other street food wafts down the road, mingling with the smoke of hand-rolled bidi cigarettes — it has a uniquely Indian aroma.

The mishmash of malcontents includes some who turn up day after day for years and others who camp out overnight to air their grievances.

A veteran demanding reforms to Army pensions poisoned himself to death in early November and in 2015, a farmer hanged himself from a tree in front of horrified onlookers.

Santosh Singh has been protesting here for four years to persuade authorities to return land that he says was effectively stolen by his own family by declaring him dead.

Mr Singh says his family destroyed all his records and then told the authorities he had died because they wanted his land for themselves.

“The media is witness to the fact that I’m alive,” Mr Singh told AFP when asked what motivated him day after day.

Anjit Kumar, an official in the Aam Aadmi Party who is a regular visitor in support of a string of causes, says Jantar Mantar is a good place to catch the eye of journalists milling around Parliament.

“You can show your strength there,” he said.

Civil protests have a rich history in India, with Mahatma Gandhi’s campaigns of non-violence, such as the 1930 Salt March, playing a vital part in shaping opposition to British colonial rule.

In the early 1990s, protesters in Delhi used to be able to march up and down Rajpath, the thoroughfare which sweeps past the Raj Bhavan and major government ministries that were built by the British.

But authorities then began imposing restrictions, eventually designating Jantar Mantar as one of the few places where protesters could gather.

Local historian Sohail Hashmi said it was shameful politicians had shunted their critics into a sidestreet.

“Those mass mobilisations on Rajpath were an opportunity for the people to communicate their anger directly to the government. Now it’s no longer possible to do anything more than have a symbolic protest,” said Mr Hashmi.