Due to mistakes of Centre, Delhi govt, sword of sealing is hanging over businesses: Maken. 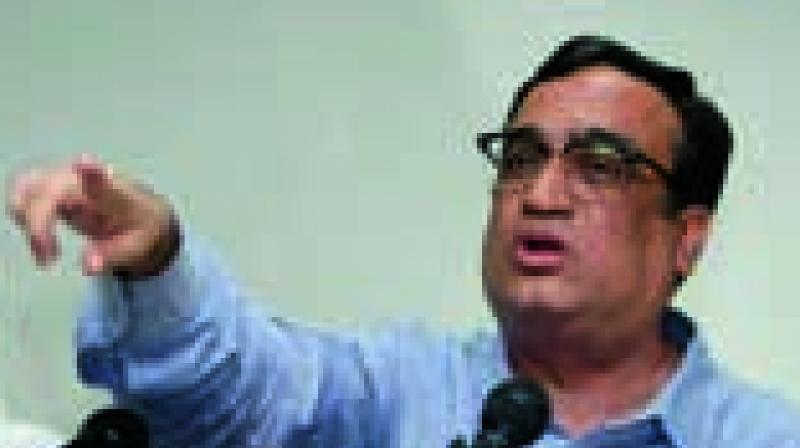 New Delhi: The Delhi Congress will hold a demonstration outside chief minister Arvind Kejriwal’s residence on Friday to protest against the sealing of non-polluting industries in the national capital.

Quoting the sixth Economic Census, Delhi Congress president Ajay Maken said on Tuesday that there were 8,75,308 industrial establishments in the city. Of these, he said 1,55,950 were manufacturing uni-ts. He said that due to the mistakes and laxity of the Modi government at the Centre and the Kejriwal government in Delhi, the sword of sealing was hanging over these establishments.

Mr Maken said there was provision in the Master Plan to give relief to non-polluting industries from the sword of sealing hanging over them which in fact was provided by the Congress-led UPA government.

He said both the governments should give permission to run the non-polluting industrial establishments in Delhi without any delay. Addressing a press conference, Mr Maken made six demands before the Central and Delhi government to save lakhs of people’s employments. He said in a gazette notification of March 16, 2005, norms for redevelopment of clusters of industrial concentration in non-confirming areas were set in which keeping in view the existing realities as well as the imperatives of planned development.

He said the redevelopment scheme will have to be prepared by the concerned land owning agency/society with the approval of the municipal corporation of Delhi and Delhi Development Authority.

Mr Maken said that according to the Master Plan 2021, Delhi government has notified 22 non-confirming clusters of industrial concentration having more than 70 per cent plots in the cluster with industrial activity for redevelopment.

He said that on the basis of this yard stick, many new areas such as Vishwas Nagar, Shastri Nagar, Tri Nagar, Sudarshan Park, Gandhi Nagar and Seelampur should be added for the redevelopment as indus-trial units in non-confirming areas. In this category Prahladpur Banger, Mun-dka and Mundka Udyog Nagar were also added on September 23.,2013.

The Congress leader said as per the Master Plan 2021, residential Group A and Villages (abadi) A+AI have already been given permission to run industrial units so that sealing in these areas should be stopped.

He said in the list of  household industries, photostate, cyclostyling, packing, wool knitting machine and  zari zardozi  were  allowed to be functional but these units were also being sealed. He said that the Central government should put small non-polluting industrial units  in the category of household industries.

Mr Maken said that in the present context, the meaning of household industries should be changed as from 5 employees, it should be made 11 workes and instead of 5 kv power, it should be changed to 11kv. He said that in March this year, he along with other leaders  Subhash Chopra and Arvinder Singh Lovely had met CM Arvind Kejriwal and city minister Satyendra Jain, who had promised to address this issue. “But nothing has been done till now, resulting in the present impasse,” he added

Mr Maken said that in the Bawana and Narela Industrial areas, 22,000 industrial plots were made available which should be made free-hold plots at the earliest. He said sealing notices were being served on plot owners who have either let out the plots, or sold them or have been kept vacant, or they have changed the nature of the industry.

The Congress leader said  that those non-polluting industries should be allowed to carry out their works which  have proof of doing work before August 1, 1990.  He said that on February 16, 2006, the Supreme Court had given permission for these establishments to function.