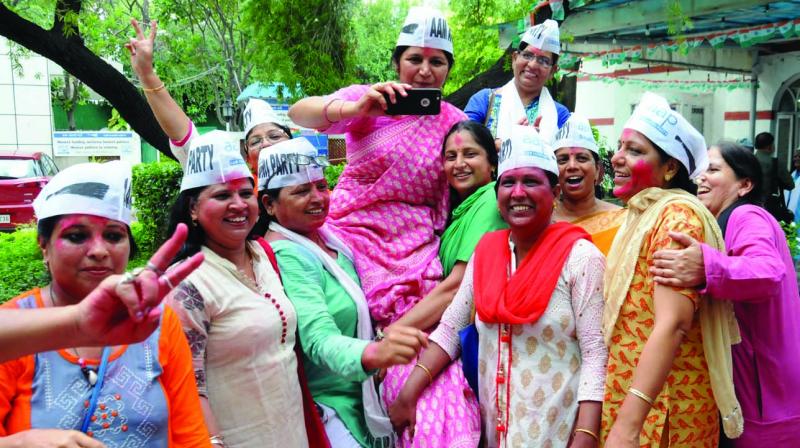 New Delhi: Celebrations break out at the AAP headquarters on Monday with the party winning the Bawana byelection by a huge margin.

Delhi chief minister Arvind Kejriwal thanked the people for choosing the party’s clean politics over the Opposition. With the win, the party’s chorus for making VVPAT mandatory has also grown louder.

Even before the results were out, drumbeats were audible from the ruling AAP’s office at 206, Rouse Avenue as the party candidate acquired an unassailable lead and celebrations began. It was a much needed victory for the Aam Aadmi Party (AAP) after its humiliating loss in the municipal elections and bypoll to Rajouri Garden Assembly seat.

About a dozen women were dancing to the rhythm of “dhol” with their faces smeared with pink and red colours and intermittent shouts of ‘jhaadu’ — AAP’s election symbol — echoing in the air.

“In the first couple of rounds, we were lagging. But we knew once counting starts in our strongholds, we will come on top,” party spokesperson Richa Pandey said.

As she was pulled into the centre of a group of women who were taking a selfie, the results of round 25 came — AAP was now leading by 23,000 votes.

In the courtyard of the party’s office, about 45 km from Bawana, people hugged and fed each other laddos and some were busy posting their photos on social media platforms.

Rita Vashit (64), who was dancing right next to the dhol, had worked around one and half months for the bypoll campaigning.

“Our work paid off,” she said, noting that the women’s wing had worked hard in Bawana.

Her friend Vinita Rutra, breaking in, added: “This time VVPAT was introduced and we won. Conduct the municipal election again with VVPAT, we’ll win for sure.”

VVPAT (voter verifiable paper audit trail) is a manual slip generated when one casts his/her vote in an electronic voting machine (EVM) so that the candidate, one voted for, can be checked. AAP has been claiming that the EVM machines were hacked and that’s why BJP was winning the elections.