Cong dream of having legislator in Assembly dashed. 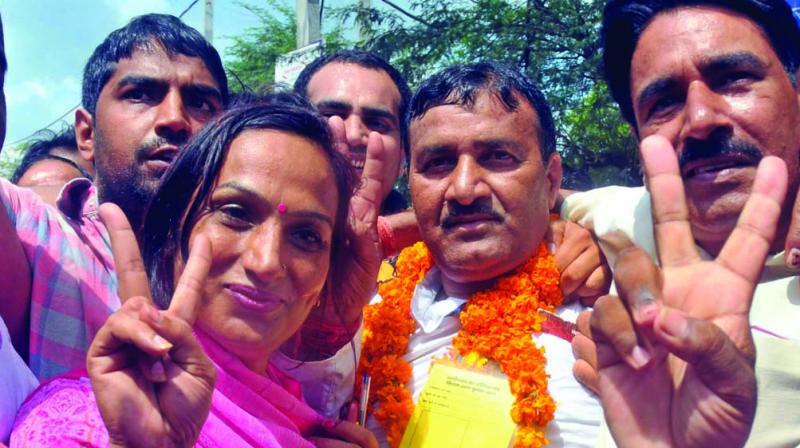 New Delhi: Battered by a spate of setbacks post thumping victory in the 2015 Delhi Assembly elections, the Aam Aadmi Party staged a remarkable comeback by winning Bawana bypoll with a significant margin of over 24,000 votes. AAP candidate Ram Chander secured 59,886 votes, while the BJP which had fielded turncoat Ved Prakash finished a distant second with 35,834 votes. The bypoll results also shattered the Congress’ dream of having a legislator in the Delhi Assembly.

Deputy chief minister Manish Sisodia and labour minister Gopal Rai, who has been heading the party’s Delhi unit since the recent MCD poll debacle, attributed the success to the AAP’s track record in governance. Some senior party leaders believed that chief minister Arvind Kejriwal’s decision to refrain from endlessly targeting Prime Minister Narendra Modi helped bring back the focus on the “achievements” of the Delhi government. “It surely has paid off. Over time, a perception had developed that the AAP and Mr Kejriwal could not go beyond petty bickering, no matter how hard the government worked. As per the new strategy, the focus is on what we have delivered. We shaped the agenda, instead of being reactive,” an AAP leader said.

Eight candidates, including three Independents, were in the fray for the high-stakes bypoll which was held on August 23. The bypoll was necessitated after Mr Ved Parkash resigned from the Assembly and the AAP, to join the BJP.

A close aide of the CM, however, said Mr Kejriwal’s silence did play a role, but this alone could not have scripted the success story in a rural constituency like Bawana, where a multitude of factors determined a candidate’s winning potential. “Bawana is not Golf Links or Jor Bagh. Not much depends on whether the chief minister is tweeting or giving interviews or speaking on the issues of the day. It is a different world together,” the leader said, preferring not to come on record.

Instead, he listed a number of other aspects, which he said were more important in the larger scheme of things, including the “demolition of the Modi wave myth”. “Another take away is that the Amit Shah style of politics of breaking other parties with money power does not always work.”