Five injured as roof of house collapses in Ghaziabad

Our priority is to fill the caved road in order to minimise the danger level. Thousands of sand bags were used to make it safe." 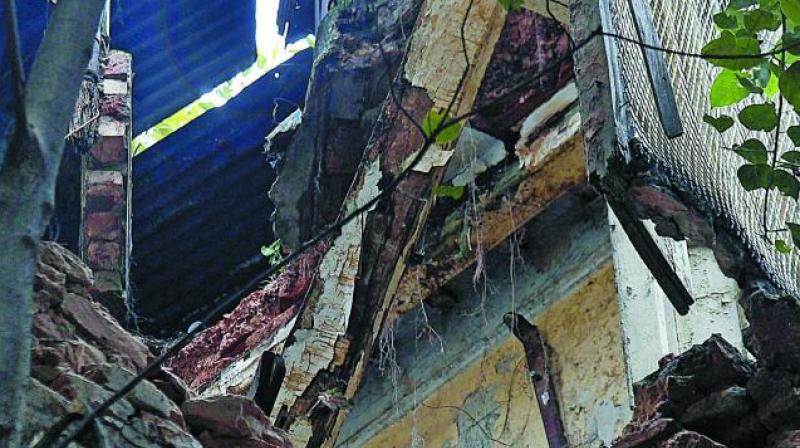 Meanwhile, construction work began on Thursday on the road that caved in following heavy rainfall in sector 4 of Vasundhara on July 26.(Representational Image)

New Delhi: Five members of a family were injured today when the roof of their house came down on them in Ghaziabad's Patla village, police said.

The roof collapsed on Saturday morning in Patla village under the Niwari police station limits, they said.

The police, with the help of villagers, pulled out the family members from under the debris and rushed them to hospital.

Meanwhile, construction work began on Thursday on the road that caved in following heavy rainfall in sector 4 of Vasundhara on July 26. Due to incessant rains, the road has literally turned into a pond.

SP (City) Akash Tomar said that about 4,000 metre plot was allotted to a builder four years ago for the construction of a group housing society and the basement was dug up.

After a few months, the construction was closed down due to non-payment of a bank loan and the matter is now sub-judice, he added. The deep excavated pit, which was left for the basement has been  filled  with rain water, resembling a pond. The water percolated beneath the road and a stretch of 30x40 feet caved in.

Our priority is to fill the caved road in order to minimise the danger level. Thousands of sand bags were used to make it safe."

Earlier on Thursday,  a road near Vartalok Society in Ghaziabad's Vasundhara colony caved in following heavy rainfall, but no casualty or property damage has been reported.

A girl has been killed in the district after the roof of a dilapidated house came down on her, the police said. As a precautionary measure, owners of 112 flats in two societies have been asked to vacate, they said.