It is a result of insensitivity of ‘directionless’ govt, says Tiwari. 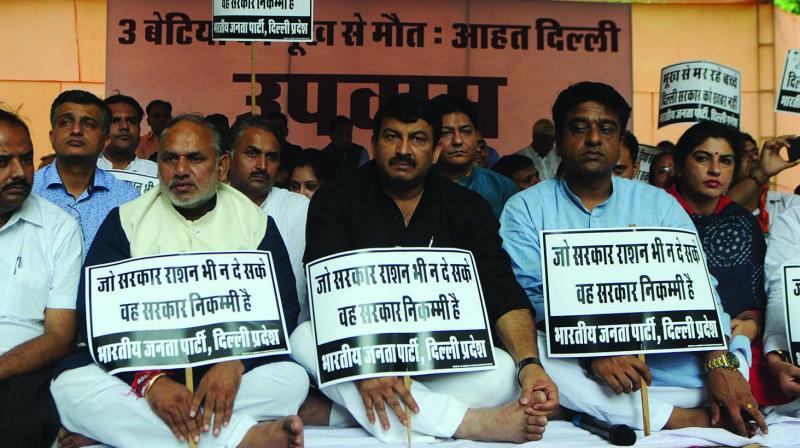 Manoj Tiwari and others at a symbolic fast in New Delhi on Saturday. (Photo: Biplab Banerjee)

New Delhi: BJP workers on Saturday staged a dharna and observe a symbolic fast on Parliament Street to express sympathy with the family of the three children who died to due to starvation and to make Arvind Kejriwal government realise his responsibility in the matter.

In the midst of intermittent rains, a large number of office-bearers and workers participated in the dharna. The workers present at the sit-in observed two minutes silence and prayed for the souls of the departed.

Addressing the workers, Delhi BJP president Manoj Tiwari said that there is an insensitive government in the ity in the fom of Kejriwal-led government and it is the result of its directionless mis-governance that the people of the city feel ashamed due to this incident tragic incident of death of three children.

"It is very sad that even after the tragic incident the Kejriwal government tried to deny the fact that the members of victims’ family were living in Mandawali of East Delhi and after that it offered only Rs 25,000 as relief to the family. It is quite unfortunate that in order to avoid its administrative and moral responsibility, the Kejriwal government got a fictitious report prepared by a subordinate officer of the rank of sub-divisional magistrate. It is a pity that it tried to negate the confirmation of death by starvation in the medical post-mortem report of the three minors," the Delhi BJP president added.

Mr Tiwari claimed that when he went to meet the family, the neighbours said that some of them had taken the children to a mohalla clinic a day ago, after that the condition of children deteriorated.

He also demanded that an inquiry must be conducted to find out what kind of medicines were given to the children.

The party workers present at the sit-in also expressed grief over the death of cows due to starvation in the Gaushala of the Delhi government, Mr Tiwari said, adding that this is another example of insensitivity and demanded that the Kejriwal government should own responsibility for this incident.