The student, identified as Aman Sinha, narrated this incident on Facebook. 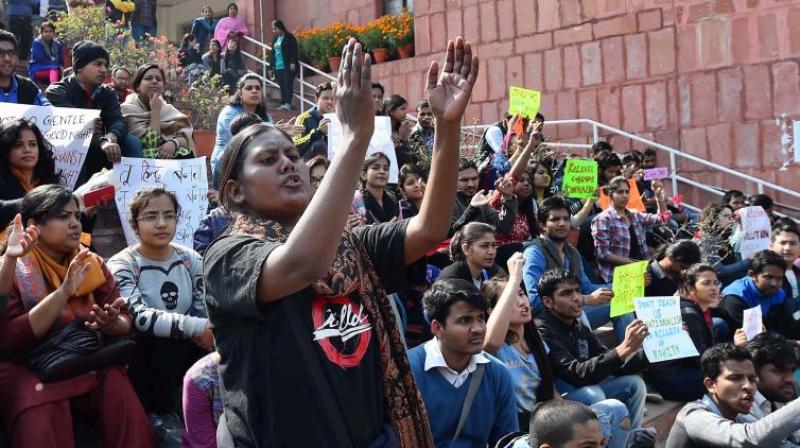 The paramilitary force alleged that the student was unwilling to unplug the earphone and used abusive language. Also, they denied charges of manhandling.

New Delhi: A JNU student has alleged he was beaten up at the Rajiv Chowk Metro station here by a few CISF personnel and told he would be sent to Pakistan, prompting the paramilitary force to order a probe even as it rejected the charges.

The student, identified as Aman Sinha, narrated this incident on Facebook. Meanwhile, the CISF rejected the charge. The paramilitary force alleged that the student was unwilling to unplug the earphone and used abusive language. Also, they denied charges of manhandling.

Sinha, who was sporting a beard, claimed that the CISF personnel got enraged when he “defied” their instructions to take off his earphones which are a laid down protocol that passengers are expected to follow.

In the Facebook post, the 22-year-old said, “A CISF person came and said you are spoiling the name of the nation, ‘Pakistan bhejenge tumhe.’ (We will banish you to Pakistan)’. They dragged me to the security office through a very long passage where there was no CCTV and no public.

“They started abusing me and assaulted me, saying that ‘public ke samne humara nam kharab kar diya’. I tried to record it, but they later made me delete it and threw away my phone.”

When contacted, the CISF said the student was only asked to write an apology letter for his bad behaviour and was neither “manhandled” nor “thrashed”. “He started yelling and arguing with constables Shoeb and P.C. Bisht who were on duty. He was unwilling and used abusive language after which he was taken to the Metro control room,” a senior CISF officer said.

As per CCTV records, the officer said, the entire  episode lasted about 30 minutes and the student was then allowed to leave. Meanwhile, Sinha also said that he will file an online FIR and will persue the matter to the NHRC.