“We are humbled to have @nikkihaley Ji and @USAmbIndia paying obeisance at Gurdwara Sis Ganj Sahab. 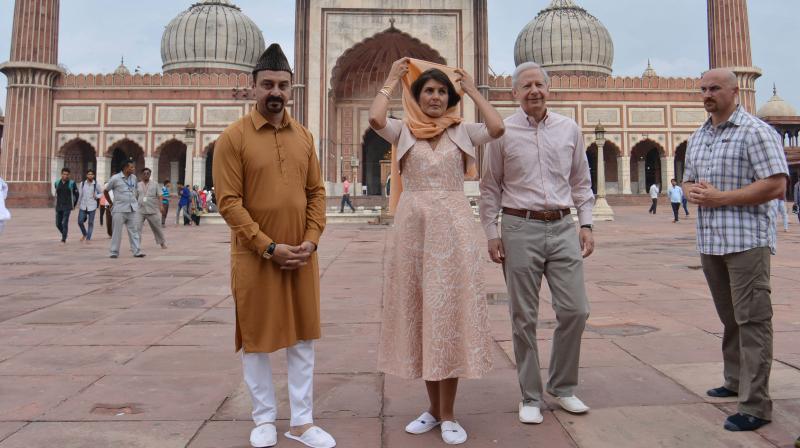 US ambassador to the UN Nikki Haley at the Jama Masjid in Old Delhi on Thursday. (Photo: Asian Age)

New Delhi: A day after she said freedom of religion was as important as freedom of people, Nikki Haley, the US envoy to the United Nations, visited a temple, mosque, gurdwara, and church in the national capital on Thursday.

On her first visit to India after becoming the US envoy to UN, Ms Haley visited the Gauri Shankar Mandir, Jama Masjid, Gurdwara Sis Ganj Sahib, and the Central Baptist Church in the morning.

Ms Haley, who is a daughter of Sikh immigrants from Punjab, also prepared rotis for langar at the gurdwara. The Delhi Sikh Gurdwara Management Committee (DSGMC) took up with Ms Haley the issue of 52 Indians, mostly Sikhs, being held at a detention centre in the US state of Oregon for being part of a large contingent of illegal immigrants seeking asylum there.

BJP legislator and DSGMC general secretary Manjinder Singh Sirsa interacted with Ms Haley while she was visiting the gurudwara along with Kenneth Juster, the US ambassador to India. The BJP legislator posted a series of tweets about his meeting with Ms Haley.

“We are humbled to have @nikkihaley Ji and @USAmbIndia paying obeisance at Gurdwara Sis Ganj Sahab. We requested Nikki Ji to address the problem of 52 Indians detained in Oregon Jail. @nikkihaley Ji immediately took note and discussed it with @USAmbIndia to resolve the issue. We will be meeting Mr Ken Juster soon to discuss the matter in detail,” he tweeted.

Speaking to reporters there, she said, “We think freedom of religion is just as important as freedom of rights and the freedom of people.”

She had visited India in late 2014, when she was the South Carolina governor. Ms Haley is the first Indian-American to serve in a Cabinet level position in any US presidential administration..