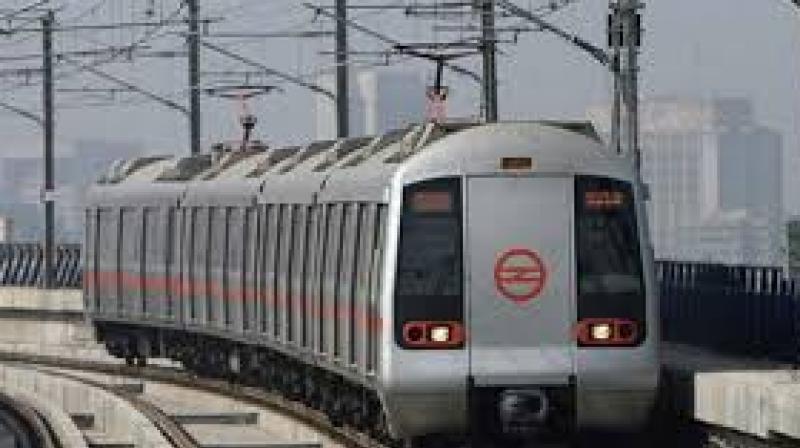 Under the phase III expansion project being implemented at a cost of around Rs 40,000 crore, a total of 140 km of network will be added to current coverage of 213 km which is likely to ease vehicular congestion on major arterial roads in the city. (Photo: PTI)

New Delhi: 2017 will see the fruition of Delhi Metro's largest expansion push in recent years with the stage set for the staggered launch of two new major corridors which missed the year-end deadline due to various hurdles including in acquiring of land.

According to Delhi Metro Rail Corporation (DMRC) chief Mangu Singh, once operational, the new corridors -- Line 7 and Line 8 -- will "ease out" the congestion in the central part of the network and absorb the next wave of crowd so people "need not worry at all".

Under the phase III expansion project being implemented at a cost of around Rs 40,000 crore, a total of 140 km of network will be added to current coverage of 213 km which is likely to ease vehicular congestion on major arterial roads in the city.

Talking about plans for 2017, Singh says commuters will travel in technologically advanced and energy-efficient trains on these sections, where metro is also putting in place a new signalling system Communication Based Train Control (CBTC).

Singh told PTI that the delay in completion of the Kalindi Kunj and Vinod Nagar depots due to land issues and encroachment in few stretches severely hit the project, resulting in it missing the December 2016 launch deadline.

"We have completed nearly all the basic structures. We intend to open few section of Line 8 (connecting Janakpuri West to Botanical Garden, Noida) by March and subsequently the rest in three parts every month or every two months.

"Trial runs on Line 7 (Mukundpur to Shiv Vihar) is likely begin sometime in April and later the sections will be thrown open to public," he says.

Singh, piloting DMRC since 2012, explained that contrary to popular perception, metro does not intend to immediately switch to 'driverless' trains - or unattended train operation - without devising a strategy.

"Our intention is to have automatic train operation without manual intervention for a more efficient system. That's a strategy we will device once it starts operating. We will start withdrawing attendants once we realise they are not needed any more," he says.

The ITO-Kashmere Gate 'Heritage Corridor', an extension of the Violet Line, will be launched by the end of January, Singh says, attributing the delay to labour crunch due to demonetisation and a temporary ban on construction activities.

The high point of 2016 was the completion of the entire Phase III tunneling work, measuring over 80 km, which DMRC said was one of most challenging and largest such exercise undertaken anywhere across the globe.

"Increasing network will ease out the congestion. There will be redistribution of crowd, pattern will change. The central part of the network - for example Kashmere Gate to Central Secretariat on Yellow Line - remains highly crowded.

"Once you have those circular lines, pattern will change. We will add 486 coaches on the new lines and 258 coaches will be added on the existing lines in the next one year. Traffic will increase and we will increase capacity. People need not worry at all," Singh says.

The 58.6-km-long Line 7 (Pink Line) will be the longest corridor of the rapidly expanding metro grid, that will touch portions of the inner-ring road and also drastically cut travel time between eastern and southern flanks of the national capital.

Line 8, christened Magenta Line, will measure 34-km. It will bring the domestic terminal of the IGI Airport within metro's folds.

This year, metro ridership touched a new high of 33 lakh in August. Above-average ridership was recorded during the two phases of odd-even car-rationing scheme in January and April.

Asked about the Delhi government's insistence that metro increase its frequency, the DMRC Managing Director said it was "not possible" to bring about any such change suddenly and without proper planning.

"But suddenly if you say you need to carry all the passengers, this was not contemplated in the '90s when the phases were planned. For increasing frequency, you need more coaches and trains. It takes at least a year and can't be done suddenly. There has to be a plan.

"At present, we are running maximum trains possible, keeping minimum trains in reserve. We have adjusted the maintenance hours. We have done whatever is possible," Singh says.

According to him, metro dealt with private parties "directly" in terms of land although the first attempt was to get land through acquisition.

"But since that machinery was not available because of the new act so we went directly to the parties," he says.

All civil structures are complete across the new corridors, barring few stretches of 70-80 metres where work will be completed in the next "five to four months".

"Unfortunately launching of corridors depends not only on completion of lines. The most important factor is the completion of the depot where the trains will be commissioned, tested.

"Two depots - in Vinod Nagar and Kalindi Kunj – suffered due to land issues and litigations. At both places we had to do midway correction, change our planning, change layouts to fit into the land available," he says.

Metro's annual expenditure on power increased by nearly Rs 149 crore from 2012 to 2015 due to a steep rise in electricity tariff in the national capital region where it operates, the Lok Sabha was informed by the Centre.

Singh pitched for a fare hike of up to 66 per cent as recommended by a panel.

"Not doing so will hit the corporation's finances as the last hike was effected back in 2009," he says.

DMRC's decision to diversify its revenue generation by delving in the areas of housing, property development, wrapping the full exterior of trains with advertisements are also paying dividends as nearly "20-22 per cent" of its revenue was coming from these sources.

DMRC has set 2021 as the deadline for the phase IV expansion, which has recently been approved by the Delhi government. The proposed lines are expected to add around 105 km to the metro network and take its total length beyond 450-km.

"Though the major corridors will be over by phase IV there still will be some gaps so small extensions may happen. It happens everywhere like in London, Paris," Singh says.

Aiming to attract more commuters to its Airport Express Line, which saw ridership breaching the 50,000 mark in August, authorities increased the frequency of trains, with peak hour services now available every 10 minutes on this premium corridor.

Among other developments, the Race Course station was renamed Lok Kalyan Marg station after the New Delhi Municipal Council renamed the the iconic British-era road that houses the Prime Minister's official residence in Lutyens' zone.