Ravana is most sought after here

Ravana’s moustaches have something written on them such as “Don No 1” or “Jaane Bhi Do Yaaron”. 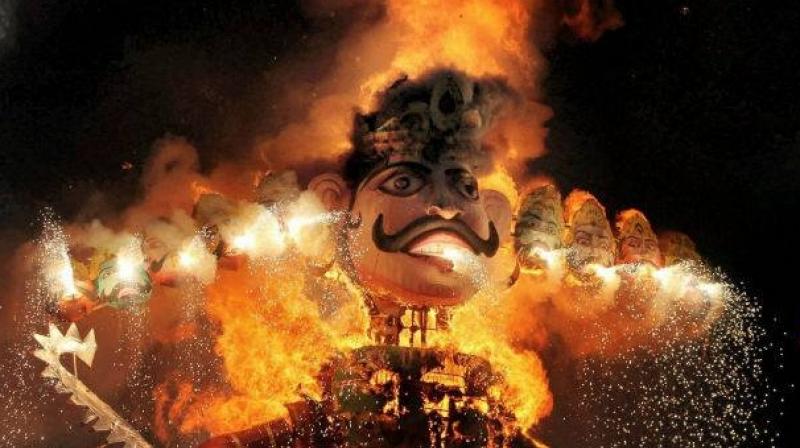 They want their Ravana to have devil’s horns, a beefed up body, wear dhoti and what not.

New Delhi: With Ravana heads and effigies lined up on both sides, it could well be the demon street, a narrow stretch where Ravana is the king and much in demand.

Welcome to west Delhi’s Titarpur locality where Ravanas stands tall, literally, their height ranging from five feet to 50 feet, many ready to be dispatched, others waiting for the glossy covering on their made-to-order bamboo bodies.

It’s not just Ravana. The stretch between Tagore Garden and Subash Nagar is where Ravana, Kumb-hkaran and Megh-nad are fashioned and ferried across the country only to be burnt to cinders on Dussehra.

“Ravana effigies are always in demand here,” said Satish Kumar from Subhash and Kaushal Ra-vanawale, one of the makeshift shops that come up at this time of the year. “Ours is the biggest market in India. People come here from Rajasthan, Punjab and Uttar Pradesh and the like to buy the effigies for the Dussehra,” Rustam Gehlot added.

Mr Rustam’s family has been selling Ravana effigies for more than 20 years. With Dussehra only two days away, the effigy makers are busy giving final touches to several customised Ravanas.

Some customers want a six-pack body for the demon king,  some want “hero-like biceps” and a broad chest. The general consensus is that he should be something like “Baahubali”.

“People have varied demands these days. They want their Ravana to have devil’s horns, a beefed up body, wear dhoti and what not. But we don’t mind as we charge extra money for all these customised orders,” he said.

The price of an effigy can range from Rs 600 to Rs 50,000. Interestingly, Ravana’s moustaches have something written on them such as “Don No 1” or “Jaane Bhi Do Yaaron”. One effigy even had, “Ok Tata bye, bye”, written on it. About 20 to 25 families in the area are involved in the business of making effigies. The work starts after Raksha Bandhan, which falls two months before Dussehra.

“It becomes pretty tiring. For the past few days, I slept for two hours per day,” said Ranjeet, whose last name is Ravanawale.

Mr Ranjeet has sold one 50-ft Ravana for Rs 31,000 to a Mumbai-based customer and sent his workers along to make sure it is assembled properly.

“There are different parts such as face, neck, body, legs and so on. These parts are sent separately and then assembled properly there. Obviously, their travel and other expenses are paid for by the customer,” he explained.

There have been several hiccups this year. The rains last week, an encroachment drive by the civic authorities damaged some of the raw material and in some cases, the completed effigies too.

But the artisans have learnt to move on and hope they will continue to earn like have in past festive seasons. “Ram ji sambhal lenge! (God will take care of us),” said Mr Satish, confidently. But the irony was not lost on him, or his family.