Youth agrees to come down after over 3-hour drama. 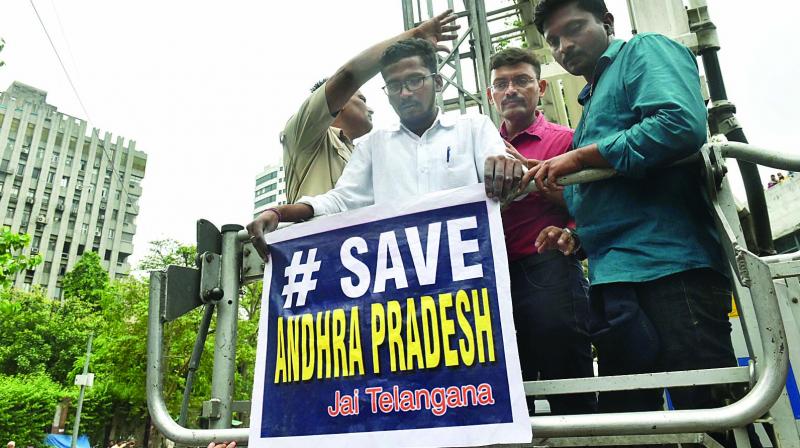 Cops and fire officials rescue a person who climbed a tower in Connaught Place fire station in New Delhi on Friday demanding a special status for Andhra Pradesh. ( Photo: PTI)

New Delhi: In a bizarre incident, a 25-year-old man climbed a tower near the Metro Bhavan in Barakhamba Road on Friday to protest the Centre’s refusal to confer special category status to Andhra Pradesh, said the Delhi police.

The man was identified as Uma Mahesh Reddy (25), a native of the state. He had a banner that read “AP needs special status.”

It took police and fire brigade officials almost three-and-a-half hours to convince him to come down.

“The man was there on the tower for quite some time but ultimately we managed to get him to come down,” DCP (New Delhi) Madhur Verma said.

A senior official from the Delhi Fire Service (DFS) said a fire tender was rushed to the spot after they received a call at 11.45 am. The man finally climbed down at 3.25 pm, he added.

Mr Reddy is pursuing his LLB from the Osmania University in Hyderabad and had come to Delhi on July 25. He was staying with a friend in Paharganj.

The police said Mr Reddy had left a note with his name and mobile number before climbing the tower. He came down only after officers reassured him that his demand would be conveyed to the Prime Minister’s Office (PMO).

A political battle over the special category status to Andhra Pradesh had led to the Telugu Desam Party (TDP) walking out of the NDA (National Democratic Alliance).

Last week, the TDP moved a no-confidence motion against the government in the Lok Sabha over the issue. The move was, however, defeated.