Seeking to end the VIP culture, the Union Cabinet had earlier decided that beacon lights will be removed from all vehicles from May 1. 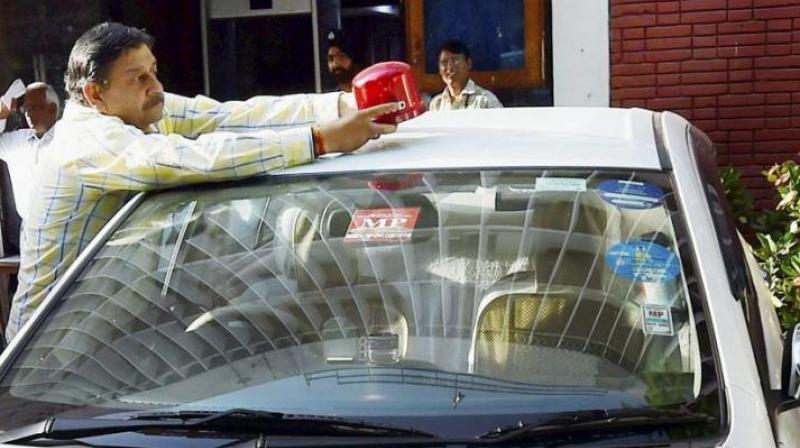 The matter regarding the purchase of these lights was discussed in the police headquarters. (Representational image)

New Delhi: In the wake of recent Union Cabinet decision to remove beacon lights from all vehicles from May 1, all Delhi police officials have been asked to remove blue beacon lights and replace them with multi-coloured detachable top lights. The Delhi police is soon going to procure multi-coloured detachable flasher lights in three sizes to be used by the senior officials.

“All officers of Delhi police are required to remove the blue beacon lights from their official vehicles and use multi-coloured detachable top lights as authorised,” said sources.

Seeking to end the VIP culture, the Union Cabinet had earlier decided that beacon lights will be removed from all vehicles from May 1. Exceptions have been made for emergency vehicles on duty for maintaining law and order, including those of the police, defence and paramilitary forces, ambulances and fire brigades.

The matter regarding the purchase of these lights was discussed in the police headquarters. It was decided that multi-coloured detachable top lights will be procured in three sizes to be used by senior police officials: length 240-245 mm, width 130-135 mm (joint commissioner of police and above); length 280 mm, width 215-220 mm (additional DCPs/DCPs and additional commissioner of police); and length 435 mm, width 215-220 mm (SHO/TI/SDPO and ACPs).

It is further stated that request for furnishing the requirement of multi-coloured detachable flasher lights for use in the vehicles of above-mentioned ranks was made on June 1. The requirement of 578 such flashers has already been received from the districts/units. A reminder for furnishing the same to the remaining units has also been sent on June 12 and 14 respectively.

According to an official, the lights will be categorised in three phases. The rank of joint CP and those above will have 42 lights while the additional DCPs/DCPs of the same rank will get 74 new lights. Also, the lower rung officials of the rank of station house officers, TI, SDPOs, or ACPs will be given 462 lights as per requirement. A total number of 578 multi-coloured detachable flasher lights will be procured by the police department.

The department has estimated a total of 720 multi-coloured beacon lights, of which some will be kept in reserve. The requirement comes at a total cost of `30 lakh. However, as of now, a request for 578 detachable flasher lights has been initiated.