Tiwari’s magnificent show in the civic polls has given him an edge over other local leaders to be the saffron party’s CM candidate. 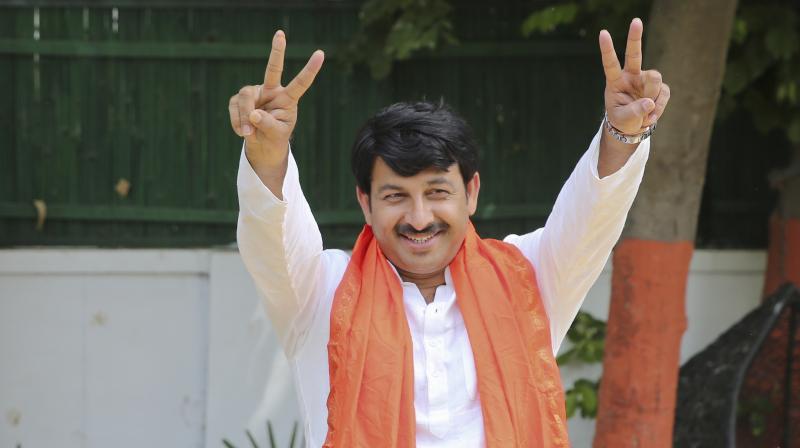 New Delhi: After BJP’s victory in the civic polls, there are speculations in the party’s state unit that its head Manoj Tiwari could be the party’s chief ministerial candidate in the next Assembly elections in Delhi.

As the party had been struggling hard to find a chief ministerial face, Mr Tiwari’s magnificent show in the civic polls has given him an edge over other local leaders to be the saffron party’s CM candidate.

Being a popular Bhojpuri actor, he enjoys a strong support in the Poorvanchali vote banks, which play a deciding factor in a large number of seats in the Assembly polls.

Buoyed by the BJP’s success, a senior party functionary said that there are strong chances that Mr Tiwari would be the party’s chief ministerial face in the next state elections. “Mr Tiwari is not only articulate but hard working as well,” he added.

Party insider claimed that by appointing Mr Tiwari, the party not only consolidated its share among 32 per cent Poorvanchali voters of the total electorate in Delhi, but also sent a strong message among Poorvanchalis present across the country. As per the initial assessment of civic poll results, the BJP believed that about 60 per cent Poorvanchalis voted for the party in the recently held election. 20 assembly constituencies in the city dominated by the Poorvanchalis comprising 17 to 47 percent of vote share. During 2013 Delhi Assembly elections, Mr Tiwari campaigned on 19 of these seats of which 14 came to BJP’s kitty.

A senior party functionary told this newspaper, Mr Tiwari, a confidante of BJP president Amit Shah, has assigned a work, which he has successfully delivered.

“During civic polls campaign, he travelled 250 km every day for a 13-day-road show and reached out to voters in 243 wards. In about 50 wards he visited twice. Mr Tiwari’s popularity and hard work is an additional advantage he enjoys over chief ministerial aspirants,” he added.