There were allegations that women students and media persons were manhandled and harassed during the clashes. 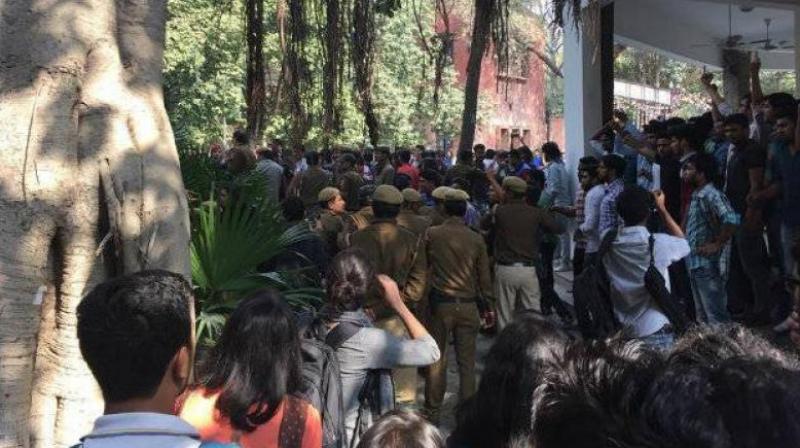 New Delhi: Following complaints that female students and media persons were harassed by police personnel during the violent clashes at Ramjas College on February 22nd, the National Human Rights Commission on Tuesday issued a notice to the Delhi Police Commissioner.

"Allegedly, some journalists who were covering the clashes were slapped, punched and kicked by the policemen. The Commission has taken on record complaints as well as media reports, making similar allegations including threats to some students on social media. The Commission has given him four weeks to submit a detailed report in the matter," read the NHRC notice.

Earlier, Home Minister Rajnath Singh said that he was in touch with Delhi Police over the turbulent situation arising out of the Ramjas College clash.

"I have told Delhi Police to practice restraint so that nothing goes wrong. I am constantly in touch with the police commissioner," he said.

A day after a clash broke out between All India Students Association (AISA) and Akhil Bharatiya Vidyarthi Parishad (ABVP) students at Ramjas College, the Delhi Police had called for strict action. They also asserting that few policemen's unprofessional actions were also noticed in handling law and order situation during the scuffle.

"On Monday, it came to the notice of top leadership of the Delhi police that unprofessionalism was seen on the part of certain policemen in handling law and order situation. We will take action according to the circumstances," Delhi Police spokesperson Dependra Pathak told ANI.

Asserting that strict action would be taken against the guilty, Pathak said a Deputy Commissioner of Police (DCP) level officer is conducting an enquiry into the matter.

"A committee is instituted and top leadership is monitoring and taking care of it. We don't condone such action. Strict action will be taken," he added.

Emphasising that the police would make sure such events do not recur in future, he said: "In future, regarding student protest, we request students to remain peaceful and be within the bounds of law."

He further said a probe has been launched into the matter.

"The allegations and adverse things have come out but we are enquiring into it. We are looking into certain allegations," he added.