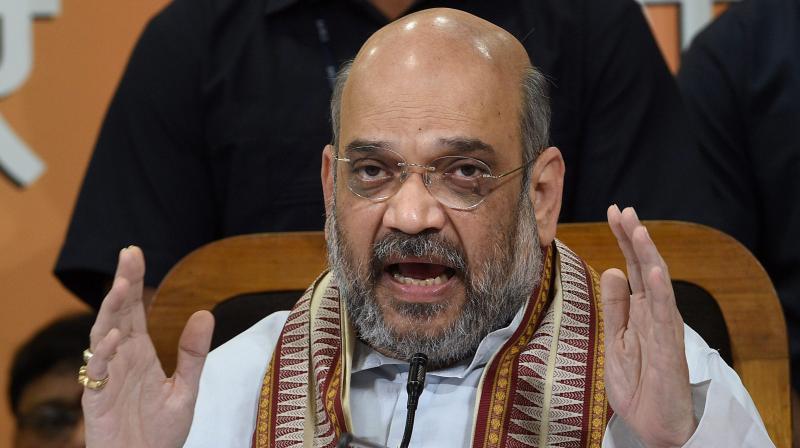 New Delhi: BJP president Amit Shah’s programme on Saturday was cancelled after the Delhi police imposed Section 144 in the national capital. Section 144 was imposed following the conviction of Gurmeet Ram Rahim in a rape case when arson was reported from various parts in the national capital. An alert was also sounded on the outskirts of Delhi in Ghaziabad and Noida where Section 144 was imposed. A bus returning from Panchkula was thoroughly checked at the ISBT Kashmere Gate.

The situation in the national capital remained “normal and under control” with the Delhi police maintaining a high alert in view of incidents of arson in different parts of the city following the conviction of the Dera Sacha Sauda chief. Extra measures like deployment of SWAT teams and reserve force and flag marches were conducted by the police.

A high alert was sounded on Friday night which continued till Saturday with senior police officers being accompanied by the reserve forces patrolling in different areas, said DCP Madhur Verma, the PRO of Delhi police. “According to feedback from different police districts, no areas are affected and the situation has been normal with day to day life being unaffected,” he said.

Prohibitory orders have been imposed in 11 of the 13 police districts, barring North and Central Delhi, in the city to prevent gathering of miscreants. “These orders under Section 144 of the CrPC are meant for miscreants only. It will not affect normal day to day life. It will be reviewed as per the situation,” Mr Verma said.

Several cases of torching of DTC buses and coaches of a train were reported from different parts of the city on Friday following the conviction of Gurmeet Ram Rahim by a special CBI court in Panchkula.

Commissioner of police Amulya Patnaik has also warned stern action against miscreants. “Appeal to all to maintain peace & order. #DelhiPolice on full alert. Strict legal action will be taken against miscreants for any violation,” he tweeted.

Delhi police has asked citizens to provide information about any suspicious activity noticed by them on its helpline number 1090 and avoid rumours. Police said ten persons have been arrested under Jyoti Nagar police station in a case of torching of DTC buses at Loni Gol Chakkar on Friday.

Police and fire department officials reported torching of buses from many parts of the city including Khyala, Badarpur, Manglapuri, near Babu Jagjivan Ram Hospital, Mandoli, Mehrauli, and Samaypur Badli. Five persons were arrested on Friday in Badarpur and Khyala incidents.

A fire also engulfed two coaches of the Rewa Express stationed at the Anand Vihar railway station on Feiday. Railway officials said that it was not immediately clear if it was a case of arson but investigations are under way.