“I am very happy. It’s an overwhelming moment. I want to thank my parents and school,” she told reporters. 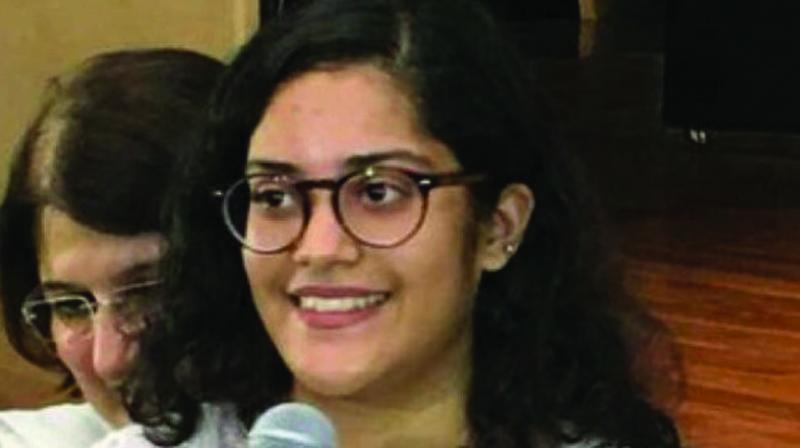 New Delhi: “It has been a thrilling experience… It’s best moment of my life. I can’t put it into words  “, that is how CBSE class 12 topper Meghna Srivastava described her success. She said there was no secret formula for her success and it was only consistent hard work that had paid off. With 99.8 per cent, Ms Srivastava secured 99 marks in English (Core), while in the other subjects — Psychology, History, Geography, and Economics — she scored a perfect 100.

“I am happy, never expected this... Class XII is all about consistency. Also do not stress over boards,” she said.

“The colleges on my wish-list are Miranda House, Hindu, St Stephen’s and LSR,” she said. The topper is the niece of former CBI director Anil Sinha, who said that she has always been a bright student.

“She has done us proud. I appreciate the way her parents have provided a congenial and happy atmosphere. They never put any pressure on her which is a considerable thing to do in today’s world,” Mr Sinha said.

Anoushka Chandra, who stood second in the exam with 99.6 per cent, thanked her parents and her school principal for her success. Ms Chandra, who is a student of the Seth Anandram Jaipuria School in Ghaziabad, scored 98 in English (Core) and 100 in History, Economics, Political science, and Psychology.

“I am very happy. It’s an overwhelming moment. I want to thank my parents and school,” she told reporters.

The CBSE Class 12 Board results were announced on Saturday. The overall pass percentage was 83.01 per cent as against last year’s 82.02 per cent.

Over 11 lakh students had registered for the Class 12 examination, which was marred with controversy over the paper leak issue. The board had conducted a re-test of Class 12 economics paper on April 25, nearly a month after it was leaked triggering widespread outrage and confusion among students across the country.