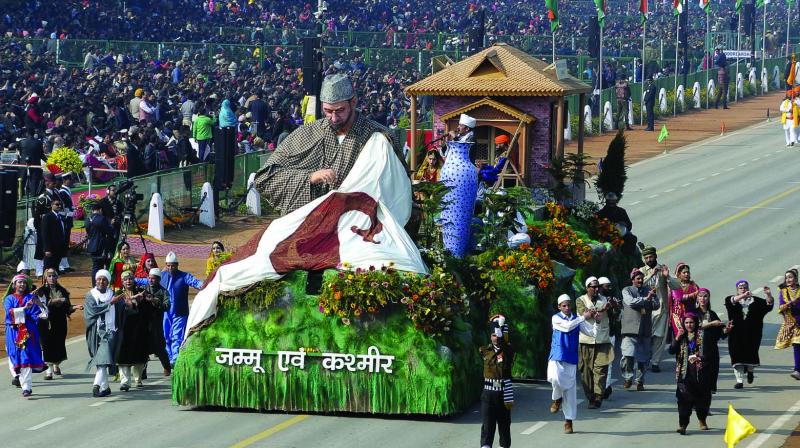 Tableux of Tamil Nadu and Jammu and Kashmir drive through Rajpath in New Delhi during the 71st Republic Day celebrations on Sunday. (Photo: PRITAM BANDYOPADHYAY)

New Delhi: Jammu and Kashmir’s “Back to Village,” Goa’s “Save the Frog” campaign, and scaled-down model of Rafale aircraft besides others in Indian Air Force’s tableau were among the themes of the 22 tableaux that rolled down Delhi’s majestic Rajpath  during the 71st Republic Day parade on Sunday.

Of the 24 tableaux, 16 were from various states and Union Territories and six from Central ministries, departments, and the National Disaster Response Force (NDRF). The tableaux of the seven opposition-ruled states — Madhya Pradesh, Rajasthan, Chattisgarh, Andhra Pradesh, Telangana, Odisha, and Punjab — also featured in the parade.

Among the states whose tableaux had been rejected for the parade were West Bengal, Maharashtra, and Kerala. Even Delhi’s tableaux could not make it to the parade.

From 2008 to 2020, Jammu and Kashmir has remained the only state whose tableaux have qualified for the parade on all occasions. The second most successful state is Karnataka (12 times) followed by Assam (10 times).

The tableaux are selected for the parade by an expert committee on the basis of the proposals received from various states, Union Territories, and Central ministries and departments. Of the 56 tableaux proposals received this year, only 22 had been selected.

The 550th birth anniversary of Guru Nanak Dev in 2019 was the theme of Punjab’s tableau in the parade. Sikhism’s architectural and cultural heritage was portrayed in the tableau, with messages “Kirat Karo,” “Naam Japo,” and “Vand Chhako,” which form the cornerstone of Sikhism, depicted in panels.

Jammu and Kashmir, which participated in the parade for the first time as a Union Territory, had the “Back to Village” programme launched last year to reach out to the people at the grassroots level.

Goa’s tableau depicted its seashore along with its biodiversity and livelihoods apart from highlighting the state’s campaign to “Save the Frog,” an anti-frog poaching campaign.

The Indian Air Force tableau showcased scaled-down models of the Rafale aircraft, the Tejas aircraft, the light combat helicopter, the Akash Missiles System, and the Astra Missiles against a sky-blue background.

While the tableau of the ministry of Jal Shakti showcased the government’s new initiative, “Jal Jeevan Mission,” aimed at providing functional tap connection to every rural household by 2024, the National Disaster Response Force (NDRF) tableau featured cutting-edge technology and instruments used by it during rescue operations in flood-hit areas and Delhi’s Anaj Mandi inferno last year.

The Walled City of Jaipur, which was accorded the UNESCO World Heritage tag in 2019, was the overriding theme of the Rajasthan tableau, depicting the Pink City’s architectural grandeur and the state’s vibrant culture reflected in its folk songs and dances.