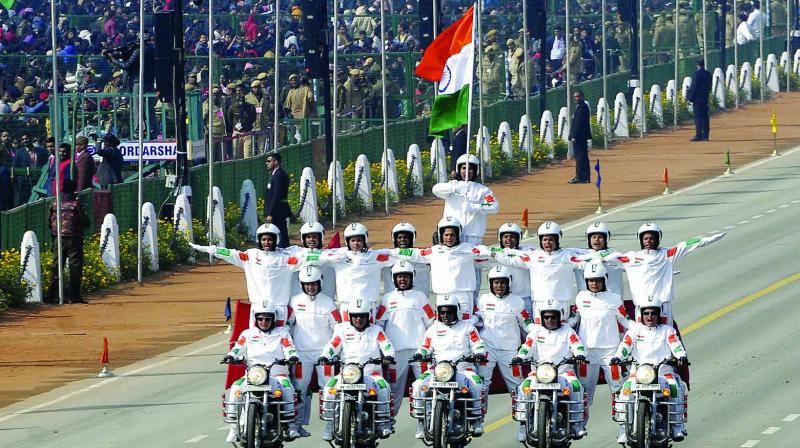 Inspector Seema Nag saluted the gathered VIPs as she led her fellow bikers, one precariously perched at the top of a ladder wedged behind her vehicle’s handlebars as others formed a human pyramid, drawing the loudest cheers from thousands of spectators.

Mr Bolsonaro sat next to Prime Minister Narendra Modi, who wore saffron turban, and waved and clapped from behind bullet-proof glass.

The all-women motorcycle team of the Central Reserve Police Force (CRPF) also won hearts with their daredevilry and many young women felt pumped up and inspired after watching them.

Ms Gill and the CRPF team, among others, represented “Nari Shakti” (women power) at the ceremonial event. Wearing a khaki uniform and holding a ceremonial sword, the 26-year-old trailblazer officer of the Corps of Signals became the cynosure of all eyes while marching down the majestic Rajpath.

The Hoshiarpur-born officer had recently created history by becoming the first woman Parade Adjutant to lead an all-men contingent during the Army Day function on January 15.

A graduate of the Officers Training Academy (OTA) in Chennai, she added another feather to her cap on Sunday, saying that it was a feeling of “immense honour and great pride, a sense of achievement and worthiness, and absolute blessing.”

The CRPF team too drew loud applause and stunned looks from the crowd as its members performed daredevil stunts. A teenage girl stood atop her chair, clapped and whistled when the all-women team zipped down the Rajpath in astonishing display of courage.

As women personnel formed human pyramid on Royal Enfield motorcycles, many in the crowd shouted “Jai Hind” and saluted the soldiers. The team was led by Ms Nag, who performed the “VIP salute” standing atop a moving motorcycle.