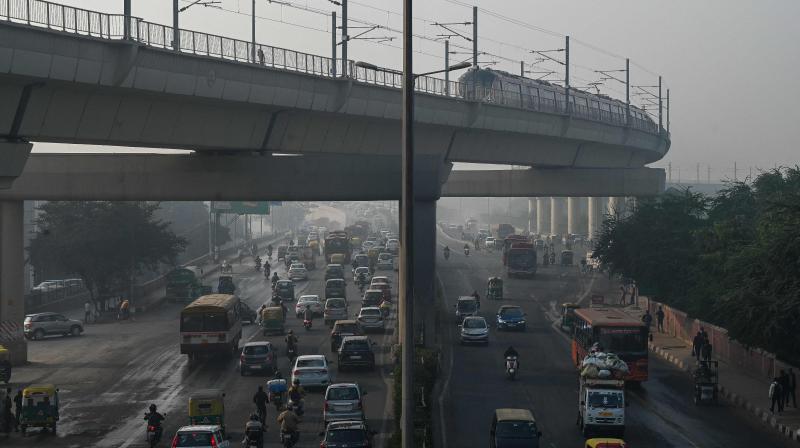 In this picture taken on November 25, 2021, people commute along a street amid smoggy conditions in New Delhi. (Photo: AFP)

New Delhi: The overall Air Quality Index (AQI) in the national capital on Friday morning slipped to 368 in the 'very poor' category, according to the System of Air Quality and Weather Forecasting and Research (SAFAR).

Gurugram and Noida recorded AQI of 350 and 463 respectively in the "very poor" and "severe" categories.

"The AQI today indicates 'Very Poor' category. Local surface winds are relatively low for the next 3 days that reduces the dispersion of pollutants leading to the deterioration of air quality but within the 'upper end of very poor' category for the next three days," SAFAR said in a bulletin.

It further said that on November 29 local surface winds are likely to increase resulting in improvement of air quality but remains within the 'Very Poor' category.

"Local emissions and weather (Mixing layer height and wind speed) are likely to be the dominant factors controlling air quality. Effective fire count is 219 and its per cent share in Delhi's PM2.5 is 6 per cent," it added.

Meanwhile, the Delhi government has once again decided to reimpose a ban on construction and demolition activities following Supreme Court's directions.

In view of an improvement in the air quality, the ban on construction and demolition activities was lifted on November 22.

The physical classes in schools, colleges and other educational institutions are scheduled to resume from Monday.

The ban on the entry of trucks, barring those engaged in essential services, will continue till December 3.