‘Prices of tomatoes, onions may go up’

The wholesale prices of onion have increased by more than 21 per cent this week. 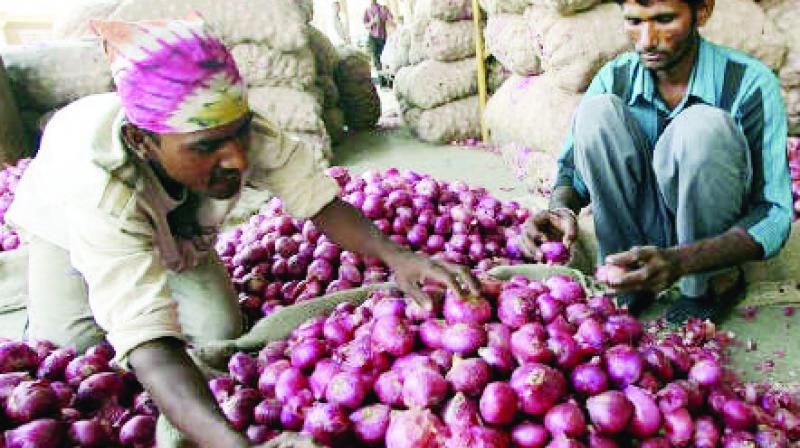 The average price of onion is Rs 2,450 per quintal on Monday as against Rs 2,050 on Thursday last.

New Delhi: Tomato and onion prices are likely to soar further in the next couple of weeks. As per wholesalers, the prices have been soaring for some weeks due to shortage of supply from the neighboring states.

The wholesale prices of onion have increased by more than 21 per cent this week, they said. In retail stores, the onions are selling at Rs 100 per kg.

A wholesaler in Azadpur Mandi said, “Vegetable prices in the capital didn’t fall even post-Diwali. Usually after the festival, rates of various vegetables go down,  but this time there is no change in the prices. The wholesalers, on the contrary, said that prices may go down after some time.”

The average price of onion is Rs 2,450 per quintal on Monday as against Rs 2,050 on Thursday last. Prices of pumpkin are also high because its demand during Chath.

Some vendors attribute the increase to unseasonal rain, while others blamed it on the extended Diwali break, when farmers did not offload stock owing to the festival.

Sunil Kumar of the APMC,Azadpur said, “The prices did not go down. There are two reasons for this; because of the monsoon and secondly due to short supply and higher demand, so we are getting vegetables from other states instead of Haryana and Punjab, which have increased the  transportation cost. Ho-wever, in few days the prices of winter vegetables such as peas and green leaves, which will be available in the market soon, may go down.”

The wholesalers said vegetables arriving in the market now are those that have been harvested in March and April.

“The summer crop has a shelf life of five to six months. The farmers store them with the hope of getting better prices. Although the farmers still have adequate stock, around 30 per cent of their stock has been damaged due impr-oper storage or spoiled due to rains,” an Agriculture produce market committee source said.