A case of rioting has been registered and an investigation has been taken up. 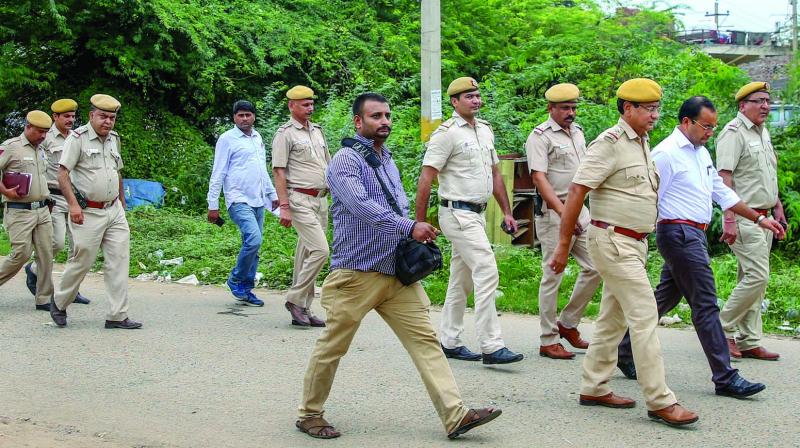 A senior officer, accompanied by a police team, visits the tense area of Rangpuri where a nine-year-old girl was allegedly raped by an unidentified man, on Saturday. (Photo: PTI)

A case of rioting has been registered and an investigation has been taken up. The police has detained around 25 people, who were part of the protest, on Friday night. Of these, 11 persons have been arrested so far for their alleged involvement.

“A large number of people belonging to a jhuggi cluster of Rangpuri Pahari area had gathered on Friday night to protest the rape of an 11-year-old girl,” DCP (Southwest) Devender Arya said.

The police received a PCR call around 7.17 pm about a traffic jam near Ryan International School at Vasant Kunj area. Following this, it rushed to the spot, the officer said.

At the spot it was found that about 500-600 people from the jhuggi cluster of Rangpuri Pahari were protesting in context with the rape incident of the minor girl.

The protesters had blocked both the carriageways of Chhatarpur-Mahipalpur Road near the Hoti Camp jhuggi. Despite being informed that the accused in the rape case has been arrested, the protesters pelted stones at the police party, he said.

The officer said that even after repeated warning when the crowd did not disperse, police had to use mild force to maintain law and order. In the process, 10 policemen, including two ACPs, sustained injuries.