Authority has decided to cut around 3,520 eucalyptus, babul trees. 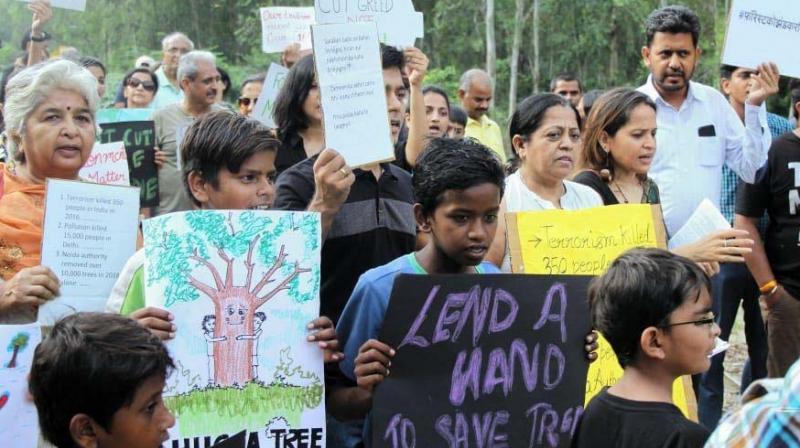 Resident groups held a ‘Chipko’ movement and embraced trees to stop them from being felled.

New Delhi: The development of a recreational park on 75 acres of forest land in Noida sector 91 has sparked protests from environmental activists and residents of the area.

Hundreds of trees are allegedly being cut for a recreational park in sector 91 which had been classified as a city forest in Noida Master Plan 2021. Activists and residents of the area held a demonstration at the site on Saturday against the move by the Noida Authority and appealed the government to not go ahead with the plan.

Resident groups held a ‘Chipko’ movement and embraced trees to stop them from being felled. Residents in Delhi had initiated a similar campaign in June this year to save 14,000 trees that were to be felled in South Delhi’s Sarojini Nagar.

Located along the Noida Expressway, the park will have an amphitheater and other concrete structures. The authority has decided to cut around 3,500 eucaly-ptus and around 20 babul trees to make way for the park’s development.

While the activists said that the forest provides green cover to surrounding areas and is a natural habitat for various species of wildlife, the officials of the Noida Authority said that there is no illegality involved as per the Noida Master Plan 2031.

An official informed that the decision for a recreational park was taken in 2014 and that 5,000 traditional and over 19,000 ornamental trees will be planted.

The park will include two lakes, an amphitheater, a multi-purpose hall, a food court, and several fountains for visitors.

“Around 60-70 per cent of the trees have already been cut. This forest provides a very important green cover to surrounding areas, is a natural habitat for various species of wildlife, and the deforestation will seriously damage the ecosystem. A lot of Neelgai, peacocks, deer, have been seen roaming around as their natural habitat has been destroyed,” said environmental activist Vikrant Tongad.