The DMRC, till Sunday, was running trains with 50 per cent seating capacity since June 7 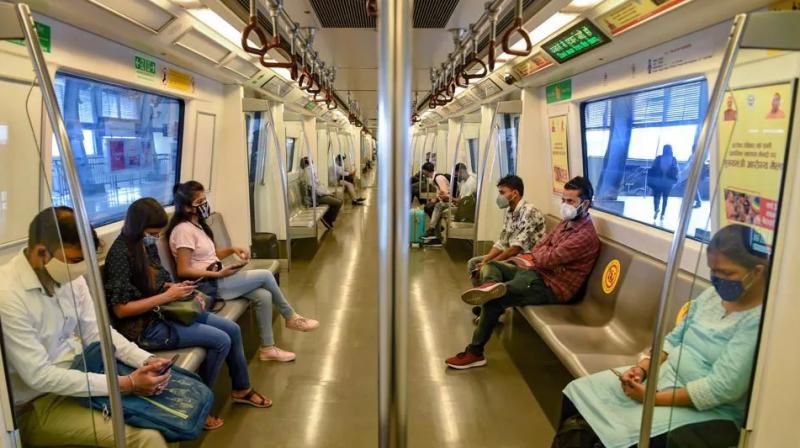 Commuters in a train after the Delhi Metro resumed services. (Photo: PTI)

New Delhi: In view of the improved coronavirus situation, the Delhi Metro services began running with full seating capacity from Monday, but there is still no provision for standing travel for commuters, officials said.

The DMRC, till Sunday, was running trains with 50 per cent seating capacity since June 7 when the services had resumed after a long hiatus.

Also, to handle increase in volume of commuters, 16 additional entry gates have been made operational at 16 stations (one at each station) across the network from Monday onwards to facilitate the movement of passengers.

The DMRC is already facilitating passenger entry at all its stations through 260 gates. These 16 gates are in addition to the already operational gates, so, now 276 gates will be operational, official said.

As and when further relaxations are announced by the authorities, the DMRC will ensure that all steps are taken from its end to provide ease of entry and convenient travel to the general public, officials said.

In view of the latest guidelines issued on Saturday by the of city government regarding Covid containment, services began this morning with full seating capacity.

However, there is still no provision for standing travel inside coaches, as has been since June 7, they said.

Around 8 am, the DMRC tweeted: "Mild tremors were confirmed around 6.42 AM in the morning. As a standard procedure, trains were run on cautionary speed and stationed at next platform. The services are now running normally".

Sources earlier had said, each coach has a capacity of about 300 riders, 50 seated and 250 standing. Since, standing commuters are not allowed, a maximum of 50 people can ride in each carriage.

Effectively, the carrying capacity is about 17-18 per cent which was 10 per cent since June 7 due to 50 per cent rule, they said.

According to the 50 per cent rule, passengers were to sit on alternate seats to ensure social distancing.

The DMRC again appealed to the public to travel by the metro "only when it is absolutely necessary and observe all Covid-related travel protocols in place for their own and everyone else's safety in this fight against the pandemic".

As travel in standing position is still not permitted by the authorities, entry at stations will also continue to be regulated through identified gates as per the ongoing practice, officials said.

DMRC services were fully suspended since May 10 in view of the Covid-induced lockdown in Delhi. It was first imposed on April 19, and successively extended by the city government.

Metro services initially ran partially, catering only to people from the field of essential services but from May 10, it was suspended in view of the rising cases amid the second wave of the coronavirus pandemic and resumed services with 50 per cent seating capacity from June 7 onwards.

The Delhi Disaster Management Authorities (DDMA) on Saturday announced further lifting of restrictions, in view of the improved coronavirus situation.

No death due to COVID-19 was recorded in Delhi on Saturday, while 66 fresh cases were reported with a positivity rate of 0.09 per cent, according to data shared by the city health department.

This was the second time, since the starting of the second wave of the pandemic in the national capital, when zero fatality had been been logged in a day.

On July 18 too, no death was recorded, while the city had registered 51 cases.

DMRC has 10 lines spanning 242 stations, and 264 stations including the Rapid Metro in Gurgaon.