Hans accused Kejriwal of betraying Delhiites and not taking any concrete steps for regularisation of such colonies. 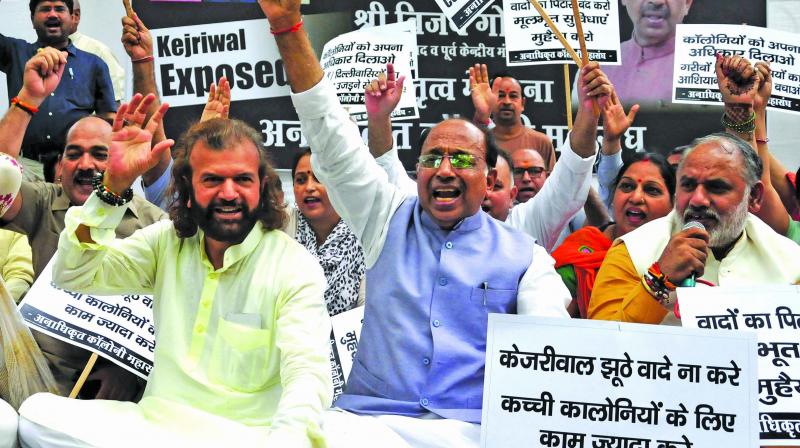 NEW DELHI: The BJP has done nothing for the residents of unauthorised colonies except insulting them, Delhi Minister Gopal Rai said on Thursday, after the saffron party alleged that the AAP government was “fooling” the people on the issue. The labour minister also sought to know from the BJP what it had done to regularise such colonies when it was in power from 1993 to 1998. Mr Rai’s remark came after senior BJP leader Vijay Goel, during a protest on Thursday at Jantar Mantar, accused chief minister Arvind Kejriwal of “misleading” the people on regularisation of unauthorised colonies.

“It is for the first time in its history that the BJP has held a dharna for the residents of unauthorised colonies. Otherwise, it has only insulted the people of such colonies,” Mr Rai said at a press conference at the Aam Aadmi Party (AAP) office.

“In 1993, the BJP came to power in Delhi and had three chief ministers within its five-year term. I want to ask what did it do then for the regularisation of unauthorised colonies? Nothing,” he said.

The BJP should leave the work of unauthorised colonies to the AAP and the Kejriwal government, Mr Rai said, asking the saffron party to do two important tasks — provide safety and ensure cleanliness in the national capital.

During the protest at Jantar Mantar, which was also attended by Lok Sabha MPs Hans Raj Hans and Parvesh Sahib Singh Verma, Mr Goel attacked the AAP and the Congress, saying, both the parties did nothing to regularise unauthorised colones during their respective tenures. “There are 1,797 unauthorised colonies in Delhi and 7 lakh people are living in them. The Congress was in power for 15 years while the AAP has been in power for five years.They have not done anything for regularisation of unauthorised colonies,” said Mr Goel.

At the protest, slogans like “Hamara CM kaisa ho, Vijay Goel jaisa ho” were also raised. Mr Hans accused Mr Kejriwal of betraying Delhiites and not taking any concrete steps for regularisation of such colonies.