Referring to the robbery, DCP Madhur Verma said an FIR has been registered and efforts are being made to nab the culprits. 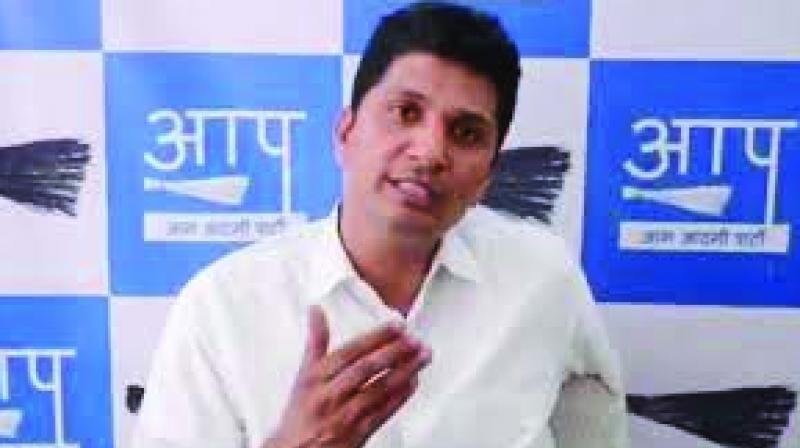 New Delhi: While saying he is ‘happy’ that BJP MLA Vijender Gupta’s wife has been robbed—because it would open his eyes to the deteriorating law and order situation in the national capital—Aam Aadmi Party (AAP) spokesperson Saurabh Bhardwaj said that getting attacked is traumatic for any woman.

Mr Gupta’s wife, Shobha Vijender, was robbed of her belongings near Mandi House in Lutyen’s Delhi, on Monday morning, allegedly by some unidentified persons.

Hitting back at Mr Bhardwaj, Mr Gupta said this shows AAP’s seriousness in the matter and alleged that AAP is seeking political gains by highlighting the law and order situation in Delhi.

In a joint press conference, AAP spokespersons Atishi and Mr Bhardwaj said that when Mr Gupta’s wife is not safe in Delhi, how can the safety of the common man be ensured?

She further said that Delhi government has given its full support to the Centre to ensure that law and order situation is maintained in the national capital. The AAP also hit out at the Delhi police and the BJP for the deteriorating law and order situation and alleged that it is busy doing politics while the citizens of the national capital are suffering. Referring to the robbery, DCP (New Delhi) Madhur Verma said an FIR has been registered and efforts are being made to nab the culprits.

“Delhi police has time and again issued advertisements and released radio jingles to alert people and make them aware about the tactics of such miscreants, who divert the attention of the person at the wheel with the intent to steal their belongings. Delhi police has busted many such Thak-Thak gangs in the recent past,” he said.