Metro parking to get costlier from May 1 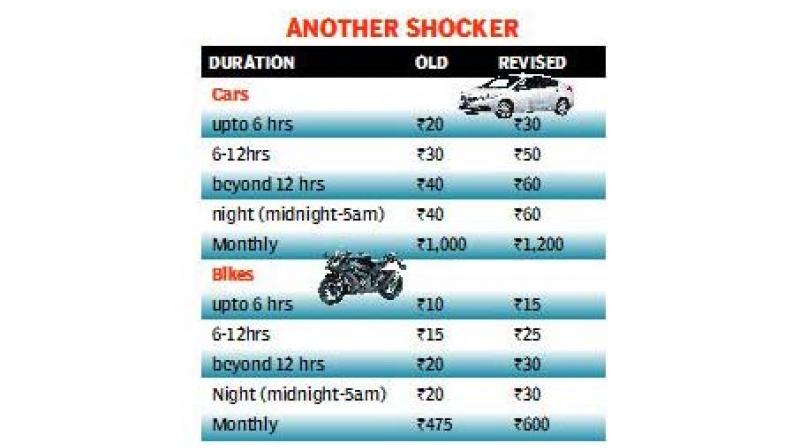 The announcement invited sharp criticism from chief minister Arvind Kejriwal, who said that the step will be detrimental for the Metro.

New Delhi: Users will have to shell out more for parking at DMRC parking lots from May 1, with the fares witnessing a 50 per cent increase across different slabs, a move that comes months after the Metro fare hike.

The Delhi Metro Rail Corporation (DMRC), in a statement, on Wednesday said the parking charges have been increased after a gap of five years in view of higher charges levied by the city’s civic agencies.

The night charges for parking cars, i.e between midnight and 5 am will be Rs 60, which is currently Rs 40, it said. The Metro has also hiked the monthly charges for car parking from Rs 1,000 to Rs 1,200. Users will have to pay double the charges if they park their cars at night.

Parking motorcycles for up to six hours will cost Rs 15 instead of Rs 10, while the charges beyond six to 12 hours will be Rs 25 against the existing Rs 15, the statement said.

The DMRC said those parking motorcycles for more than 12 hours will have to pay Rs 30 instead of Rs 20, while the night charges for parking between midnight to 5 am hours for the same have been increased from Rs 20 to Rs 30.

The monthly charge for parking bikes has also been hiked from Rs 475 to Rs 600 and the amount will be doubled if bikes are parked at night, i.e from midnight to 5 am, it said.

Parking cycles at the Delhi Metro’s parking lots for up to six hours will cost Rs 5 instead of Rs 3. If it goes up to 12 hours, the parking rate will be Rs 5 against the existing Rs 4, the DMRC said.

If a person parks his cycle for more than 12 hours, he will have to pay Rs 10 instead of Rs 5. The monthly charge for parking cycle has been increased from Rs 45 to Rs 70 and the amount will be double if cycles are parked at night as well, the statement said, adding the night charge for parking cycles between midnight and 5 am will be Rs 10 instead of Rs 5.

In October last year, the DMRC had effected the fare hike, leading to a rise of around Rs 10 for nearly every distance slab, which had come barely five months after an earlier hike of up to 100 per cent.

The Metro, however, lost over three lakh commuters a day after the steep fare hike came into effect on October 10, an RTI query had revealed. The Metro’s daily average ridership came down to 24.2 lakh in October, 2017 from 27.4 lakh in September that year, translating to a fall of around 11 per cent, the RTI had revealed.